With an ever-growing population of players and spectators worldwide, understanding soccer seems a critical part of being a human these days. So you are wondering, how are soccer games divided, and do they have quarters? We've researched the duration of a soccer game to answer that question and more!

Soccer games consist of two halves. Two forty-five minute halves are the standard for professional soccer games around the world. Between these halves, there is a half-hour break, known as half-time. Generally, there are no time-outs allowed during the halves.

Keep reading to learn more details about how soccer games are timed and split up. First, we will explain how injury time and interruption are dealt with and how overtime and tiebreakers are handled. Then, we will cover how long youth games are. Finally, we will explore how substitutions are handled. 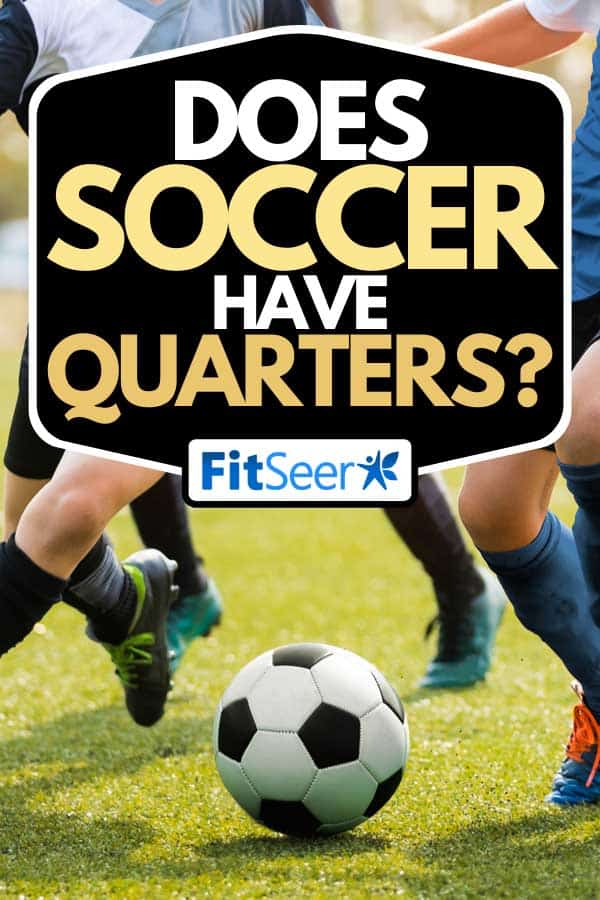 How Soccer Games are Timed

The official governing body for soccer, or futbol as the game is known internationally, is the Fédération Internationale de Football Association (FIFA). Every year, a branch of this organization issued updated laws of the game - or an updated list of rules. One rule that has stayed consistent for well over 100 years is the game's length and period format.

Since 1897, soccer has been played in two forty-five minute halves for a total time of ninety minutes. Usually, the referee is in charge of keeping track of the time. For very competitive play, an official (known as the 4th official) is in charge of tracking game time. Since the clock runs continuously during the halves, and there are no time outs, a strategy was needed to handle stoppage in play. The answer is stoppage time.

How does stoppage time work in soccer?

The referee, or sometimes the 4th official, keeps track of the total time the game is played and not played. They add up injury time, interruptions, and other times when the ball is out of play. The extra time tacks onto the end of the half. Usually, there are two to six minutes of stoppage time added to the end of each half.

The use of stoppage time is standard for almost all ages and types of soccer. The utility of stoppage time partially stems from the inevitability of injury and interruption. However, without stoppage time, teams of all ages were found to waste time running out the clock - especially when winning.

The referee will usually communicate the amount of stoppage time they are adding to the half. Sometimes they accomplish this by holding up fingers that coincide with the number of stoppage minutes. Other times a referee will hold a sign up showing the players and spectators how many minutes are added.

For some soccer formats, such as college soccer, the clock runs down from 45-minutes to 0. For this format, stoppage time is accomplished by actually stopping the clock when play halts. In theory, both techniques end in the same half-length.

Does Soccer Have Overtime?

It is sometimes the case, especially in tournament play, that a winner must be determined. In the event of a tie, the games can go to overtime. Usually, there are two overtime periods of 15-minutes each. However, the overtime rules are often different from tournament to tournament and league to league. Sometimes the lengths are different, and sometimes the overtime can be sudden death - when the team who scores first wins.

If there is still a tie after the overtime periods, the game goes to a penalty shootout. Five players from each team get to take a shot from the penalty spot against the opposing keeper. Whichever team scores the most out of five wins the game.

Overtime only comes into use during certain tie-game situations. For most regular-season games, the game can end in a tie without overtime. Overtime is thus generally only applicable for tournament and play-off settings.

Young soccer players have less stamina and attention span than older players, so their games are naturally shorter. There is a wide range of recommended lengths depending on the age range of the players. In this section, we will cover the suggested game length and overtime rules for American youth soccer matches.

This issue is confused because there is no single organization that provides recommendations for youth soccer rules in the United States of America. In this article, we provide U.S. Youth Soccer rules - the organization most closely associated with FIFA. Check with your local league to confirm the rules followed in your region.

US Youth Soccer recommends play be split into four quarters for this age of players, each being ten minutes in length. Generally, there are two minutes between quarters and a five minute half. There is no provision for overtime.

Games for kids of this age are first split into the more traditional halves, each of 25-minutes. The half-time break is generally about 10-minutes long. There is no provision for overtime in the event of a tie.

The length of the game increases for this age group to two halves of 30-minutes each. Also, there is the overtime provision of two additional 10 minute periods.

For this age, the halves are only 10-minutes shorter than full-length halves. So there are two 35-minutes halves to the game. The overtime periods are 10-minutes each.

Each half is 40-minutes. The overtime periods rise to their adult length of 15-minutes each.

For youth under 17-years and older and college games, each half is 45-minutes in length, and the half-time is 30-minutes. The two overtime periods are each 15-minutes long.

How often can you sub in soccer?

Like most of the questions so far, the answer to how often you can sub depends on your league and the players' ages. For official, competitive, adult play, you can sub only three times per game. That means that you can pull three players off and put three players on. Even if a player must be replaced due to injury, that sub still counts to the three.

Generally, youth rules through high school are much more flexible and allow for as many subs as you want. The increased freedom affords more players a chance to play and reduces the chance of injury. Due to the low number of subs, it is important to become "match-fit" as they say, so it is possible to play a full ninety minutes.

Other than very youth games, soccer does not have quarters but instead plays halves. This might be an odd change for those of us used to watching American football, hockey, or basketball, but the long history of halves will probably be sticking around for a while.

As described, the rules are relatively consistent but are often different for certain regions or certain tournament situations. To be sure of the rules most applicable to you, ask a local referee, coach, or organizing body. Happy dribbling!

Does Swimming Dehydrate You?

How Often Should You Do Zumba (Is Everyday Ok?)

Is Surfing Easy or Hard to Learn? [Here Are the 6 Steps to Take]