Soccer is known as "the beautiful game" and is played all around the world. It can be easily enjoyed by anyone because it requires very few supplies: just a ball and two goals. However, to properly play a soccer match, you must have plenty of space for the field. But exactly how big is a soccer field? We've checked with all the regulations to bring you the answer.

Soccer fields, or pitches, vary based on how much space is available and the age of players. We know this can be confusing, so don't go anywhere. Continue reading for a deeper explanation as to why soccer fields are different sizes, the optimal size for each age group, and answers to other common questions! 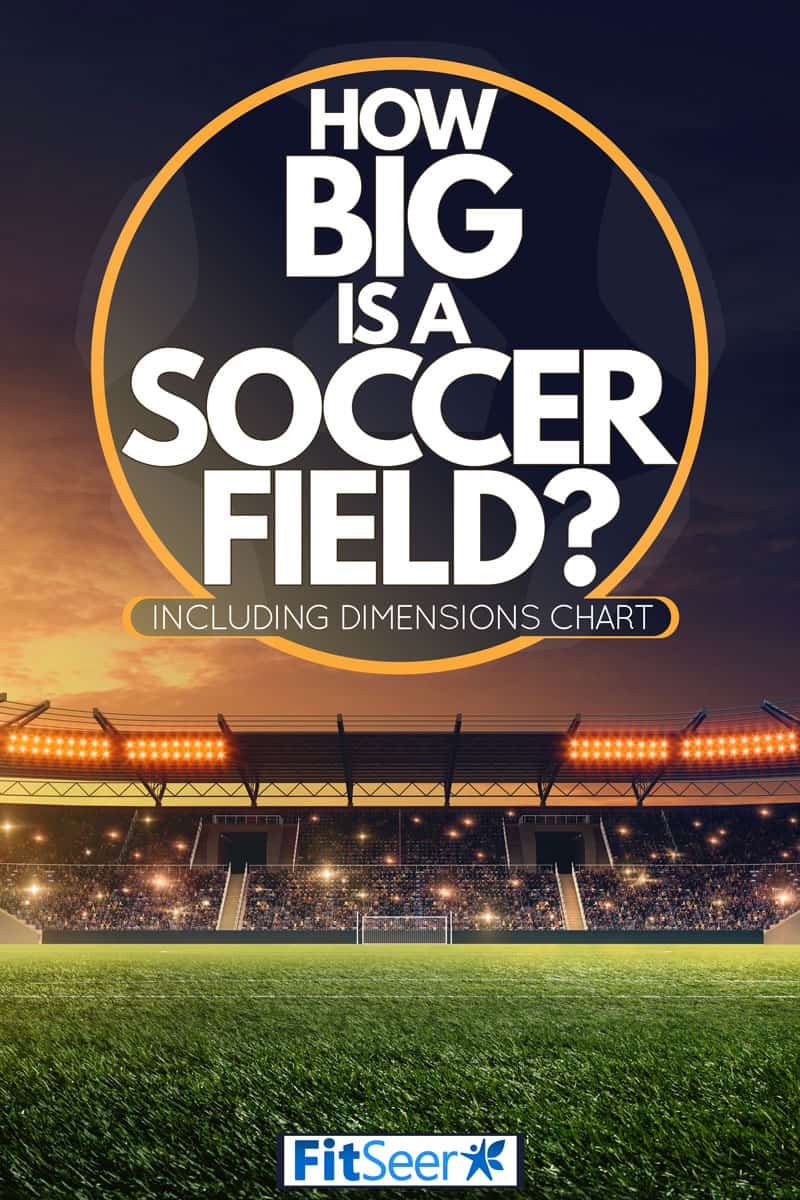 Why aren't all soccer fields the same size?

You'll notice that the dimensions outlined above provide a range of width and length. This means that all adult soccer fields -- even those used at the highest level of soccer in the world -- can differ from each other. There are a couple of explanations for this.

Many years ago, in the nineteenth century, when soccer was not as lucrative as it is now, teams did not have state-of-the-art stadiums and fields. Thus, when they hosted a home game, they often had to make do with what they had: playing at city parks, borrowed land, and other makeshift pitches. Many began playing on rugby or cricket fields.

When organizing bodies arose, they gave teams a range of dimensions to help standardize the playing field. This range allowed teams that already had proper home fields to not have to drastically change.

Another complication is that soccer fields were initially measured in yards, using imperial units. At varying points when teams began building their own stadiums, they used the metric system and measured in meters.

Now, clubs and teams can tailor their style of play to their home pitch, giving them an advantage over visiting teams.

The wide range of 50 to 100 yards wide and 100 to 130 yards long gives flexibility for teams that are limited by space. For instance, many amateur teams in America play soccer games on American football fields, which are often smaller.

Many soccer fields around the world are found in soccer complexes, where multiple fields are placed in the same location. In order to maximize space, some of these fields are on the lower end of the dimension range.

How big is a soccer field in the World Cup? 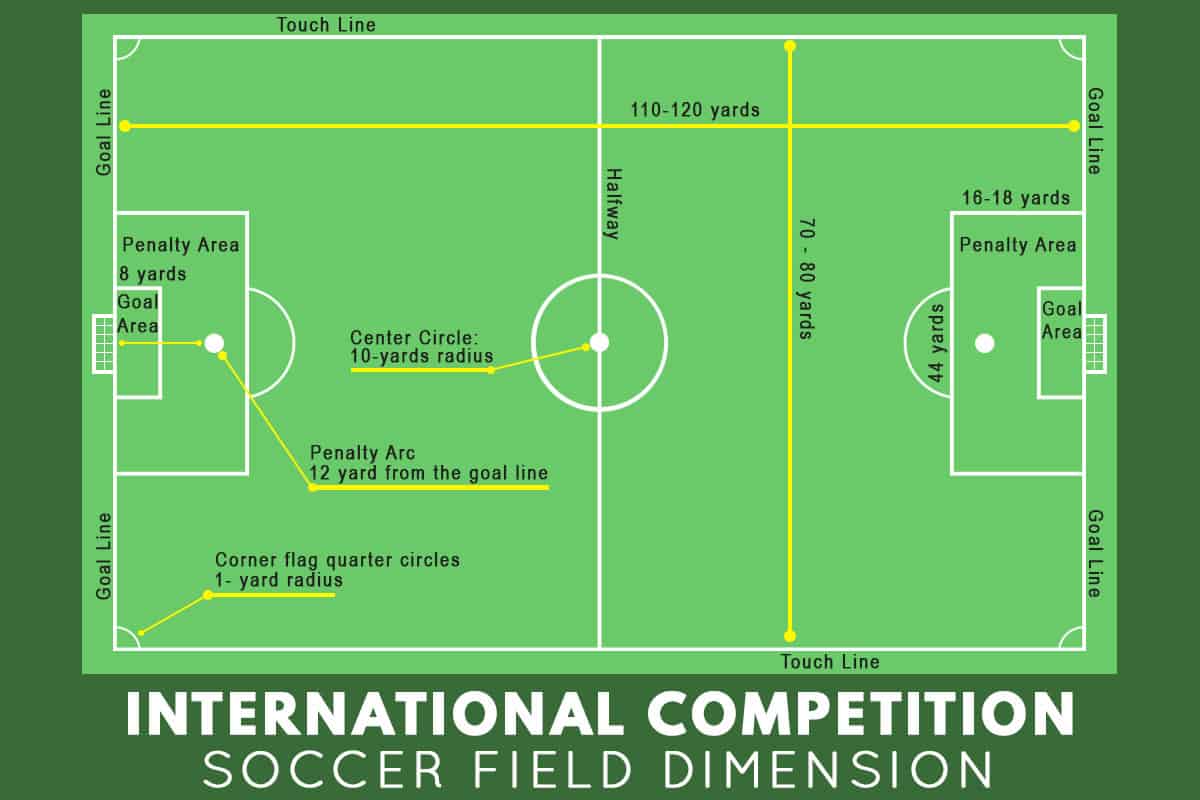 Each soccer organization, (FIFA, UEFA, IFAB, etc.) develops its own Laws of the Game. FIFA, the organizing body of the World Cup, states in their Laws of the Game that the field may range from 70 to 80 yards wide by 110 to 120 yards long.

The World Cup is hosted by a specific country, with games being played in various cities around the country. This range allows for matches to be played at existing stadiums without major variations to their dimensions.

Here is a list of recommended dimensions for youth soccer pitches (measured in yards): 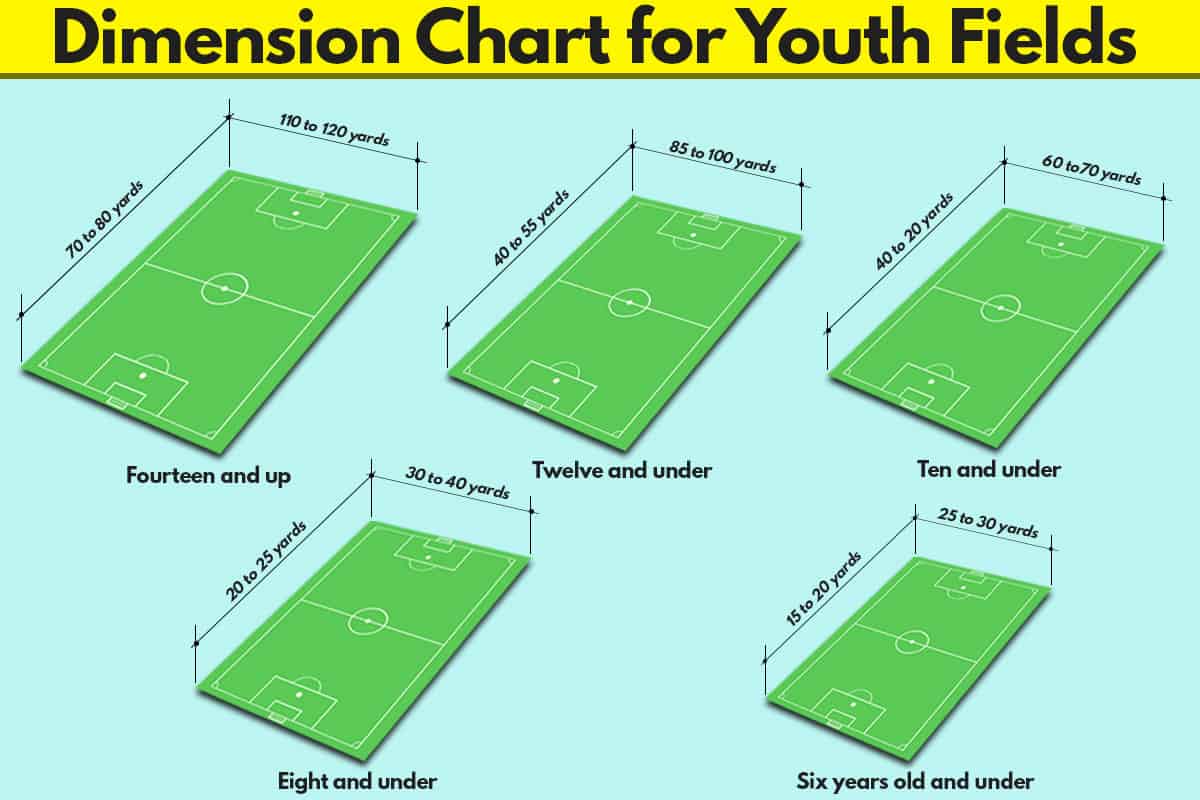 These smaller dimensions fit young players who are not as strong as adults. A smaller field means that players are more likely to touch the ball, score goals, and be successful.

We recommend that if the field is to be used by multiple age groups, it be on the smaller end of the spectrum of the oldest age that will play there. For instance, if a pitch is to be used by children from eight to twelve years old, the field should be approximately 40 yards wide by 85 yards long.

There are many other lines on a soccer field that serve different purposes. These are more specific dimensions than the length and width of the field.

Want to learn more about the rules of soccer? Check out this article for more information!

How many football fields fit in a soccer field?

An American football field can fit into a soccer field once, though it is more narrow than most soccer fields. Football fields are always the same size: 50 yards wide by 100 yards long, plus an additional 10 yards long for each end zone.

Looking for cleats to wear? Check out this article for details on how to pick out the right size.

Where is the biggest soccer field in the world?

The biggest professional pitch in the world is largely believed to be Old Trafford, home to Manchester United in England. It measures approximately 78 yards wide and 116 yards long, giving it an area of 9,048 yards.

As far as stadium capacity, Rungrado 1st of May Stadium in Pyongyang, North Korea has a capacity of 150,000, making it the largest soccer stadium in the world.

AT&T Stadium in Arlington, Texas is the second largest soccer stadium in the world, holding 105,000 people. It is most often used as the home of the Dallas Cowboys, an American football team.

The third stadium that holds over 100,000 people is the Melbourne Cricket Ground, located in Melbourne, Australia, with a capacity of 100,024.

Why is a soccer field called a pitch?

The term "pitch" is widely believed to have originated from the sport of cricket. In order to set up a cricket field, one must drive stakes into the ground as if pitching a tent. A cricket playing field contains posts called "stumps" at which a ball is thrown. The stumps must be pitched into the field to prepare for the game.

It is assumed that using the word "pitching" to mean throwing a ball (like in baseball) originated here.

Soccer fields vary in length and width depending on how they are used and where they are located. The general rule of thumb is that a field should be between 50 to 100 yards wide and 100 to 130 yards long.

The recommended dimensions are 75 yards by 120 yards, which is often used by professional teams around the world. Youth soccer pitches should be significantly smaller to give each player and team the chance to be successful.

We hope that this article has helped you understand soccer better so that you can enjoy the beautiful game!

Should A Treadmill Be On A Mat?

5 Types Of Resistance Bands To Know

Can You Wear A Bike Helmet For Skiing?

Do Football Gloves Stretch With Use? [And How To Stretch Them Faster]