With all the running and tackling players do while wearing cleats, you've probably have been curious about the durability of the turf. The constant rough contact with the turf mixed with varying weather would make anyone wonder how it holds up. Maybe you've even wondered how the field still manages to stay green, especially if it's real grass. After doing the research, we've found the answers to these questions.

Football fields are tended to just like any other grassy plain or lawn: regular mowing, watering, and sunlight. Not all football fields use real grass. Artificial turf has become a cost-effective alternative to natural fields.

Continue reading to understand how football stadiums use and maintain different turfs. Wondering how the athletes feel about natural versus artificial playing fields? We've got an insight into the players' opinions too! 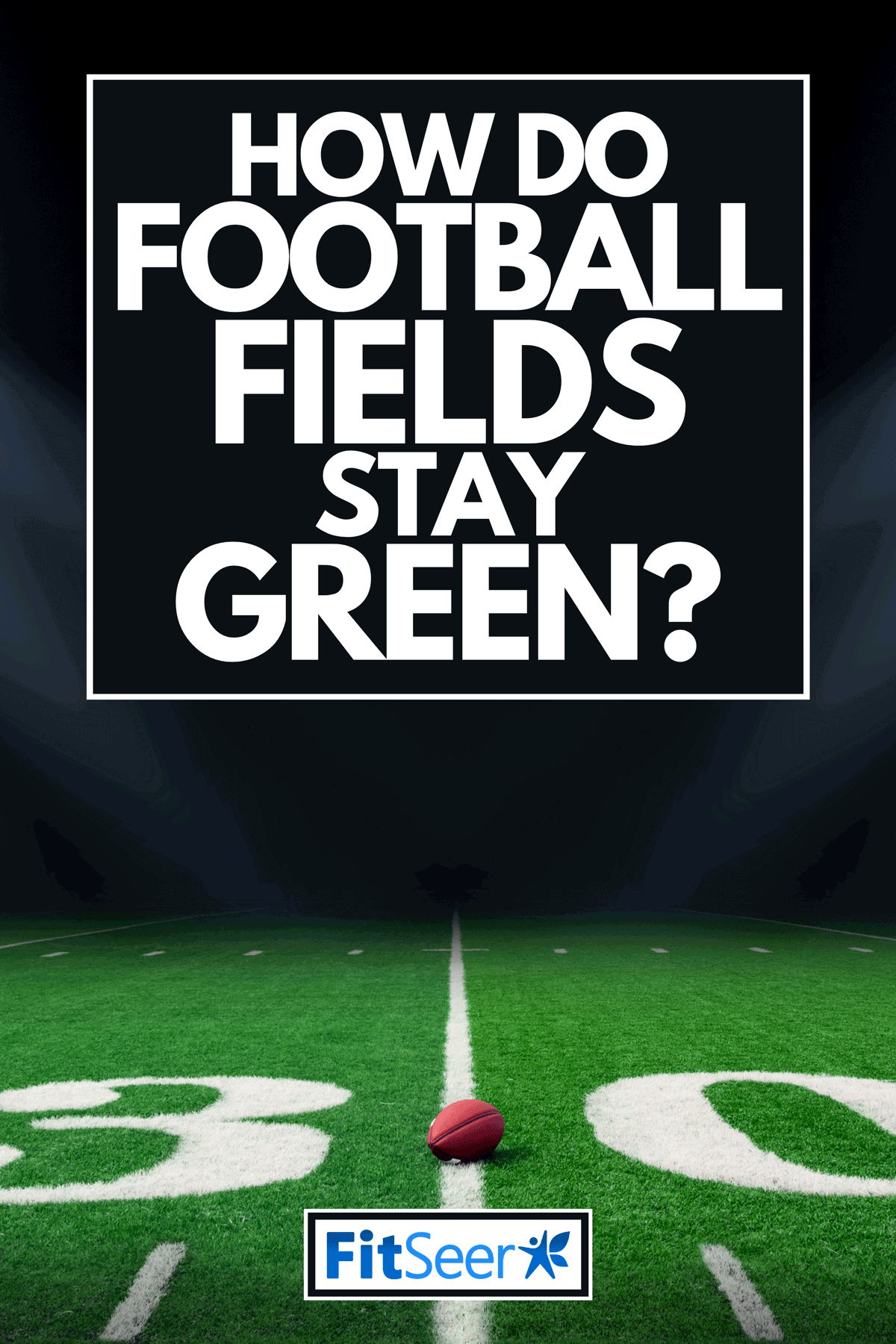 What Kind of Grass is Used on Football Fields?

Determining what kind of grass to use on a football field requires science and strategic thinking. Why? Because there are several stadiums across several climates in the United States. One grass type may not be effective to use in one region, yet perfect for another region. It all just depends on the stadium location.

A football stadium will have one of these kinds of grass turfs:

According to Cornell University, the grass is chosen based on its strength against wear and tear, heat, field use, pests, and its color, growth, and overall maintenance.

A good portion of football fields utilizes artificial turf. This turf has synthetic fibers made to look like grass and used with sports that play on grass.

Artificial turf is more efficient to use than regular grass turf. It withstands wear and tear much better than natural turf. It's also easier to maintain; there's no real lawn care that needs to be done.

The main disadvantage of artificial turf is its environmental impact. Besides tire debris, the rubbers within artificial turf make up a significant portion of rubber pollution.

If you ever wanted to guess whether a turf was real or artificial, consider the climate. That alone could give you a pretty good guess as to what kind of turf a stadium is using.

Which Artificial Grass or Turf is Best for Football Fields? 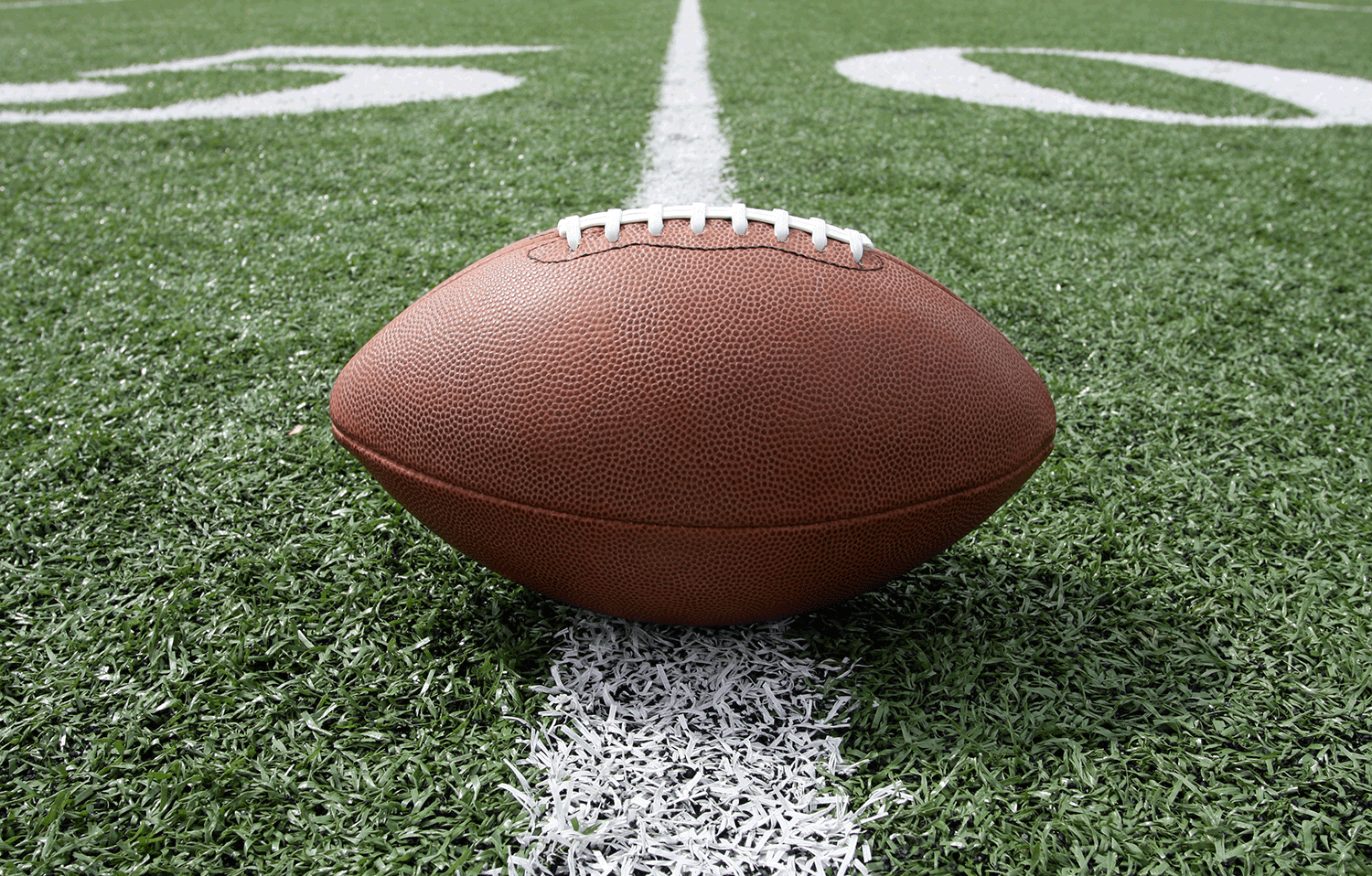 Whether artificial grass or turf works best for a football field depends on numerous factors. We've discussed how climate and weather are the main factors. Two other factors to consider include cost and maintenance.

Let's start with costs. The size of the stadium contributes to the total cost of turf, artificial or natural. According to Turf Factory, installing artificial turf can cost $2 to $5 per square foot and $8 to $20 for natural turf. Installation and landscaping will add to the overall bill, too.

Upfront, artificial grass will cost a stadium more money. But the reason it's often preferred over real grass turf is its long-term savings. Unlike natural turf, maintenance only needs materials to clean and disinfect the field for the most part.

With natural turf, it's cheaper upfront but will cost more over time due to more expensive maintenance costs. The natural turf requires much more watering, fertilization, mowing, and small repair.

How Are Football Field Turfs Maintained?

To keep the field's longevity, regularly scheduled maintenance is required before, during, and after a football season.

For a natural turf, mowing it is the first step. The field is usually mowed twice a week but can go up to five times a week. The grass blades need to be kept at around an inch tall, depending on the type of grass the turf has.

Next for natural turf is fertilization. Fertilizer is applied to the turf during seasons when the grass grows more actively, commonly the springtime. Every year or two, maintenance needs to check the soil for its nutrient content. The less necessary nutrients a field has, the more fertilizer is needed.

To strengthen a natural turf, overseeding is another maintenance task. This is the process of applying seeds to strengthen the turf. This is important as the wear and tear throughout a season can weaken the field. The seeds help recover the strength that the field loses over time.

One of the most notable artificial turf fields is Albertsons Stadium, home of Boise State Football. Nicknamed "The Blue," it was the only non-green field in college Division 1 FBS football up until 2014. That's when Rynearson Stadium, home of Eastern Michigan University football, introduced a gray field.

Many college football fields have artificial turf. Most NCAA Division 1A programs use it. Cost-effectiveness was the primary motive for this decision. As noted earlier, natural turf takes more water to maintain. Artificial turf saves these programs several thousands of dollars per year on maintenance costs compared to natural turf.

Artificial turf is much easier to maintain, but that doesn't mean it's maintenance-free. Most artificial turf maintenance is cleaning up debris. It's also sanitizing and disinfecting the field, so the players are safe.

When it's hot outside, watering the artificial grass is necessary to keep it cool. Maintenance needs to test the artificial turf for firmness; too firm of a field increases the risk of concussions.

Which College Stadiums Use Real Grass? 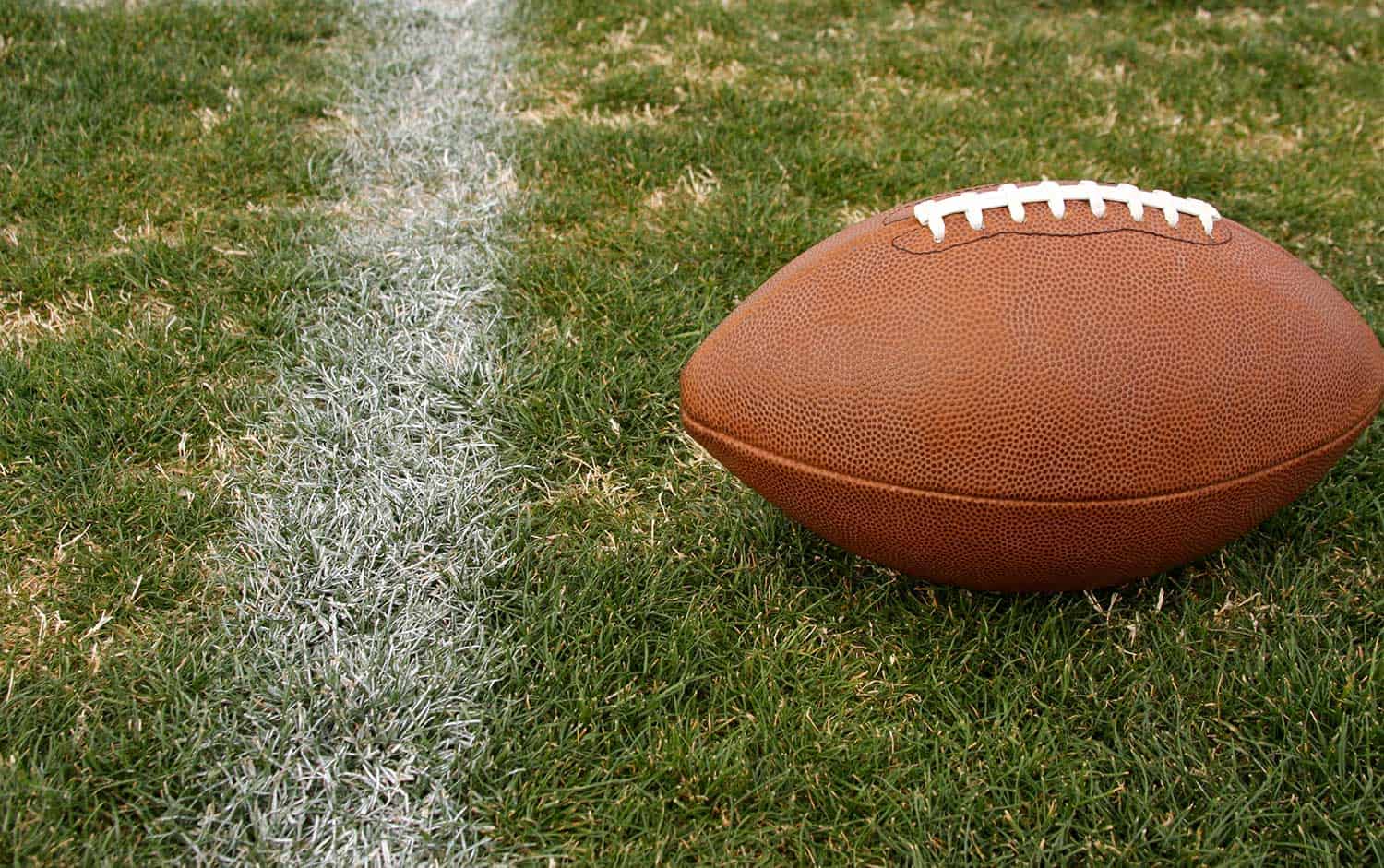 Some of the more popular natural turf stadiums are mentioned below:

Are NFL Fields Turf or Grass?

There has been some debate about the use of artificial and natural turf. Many players have expressed their preference to play on natural turf. And for a good reason.

The NFL Player's Association has reached out to team owners encouraging them to make all stadium fields natural turf. The reason is due to player longevity. While artificial turf is more cost-effective, it also leads to more injury.

Additionally, at least 92% of players notice a positive difference in gameplay performance on natural turf instead of artificial, according to Michigan State.

As of 2020, over half of NFL teams play on natural turf. These NFL stadiums have natural turf:

How do football players grip the field? Check out "Should Football Cleats Be Tight Or Loose?"

How do They Keep Snow off Football Fields? 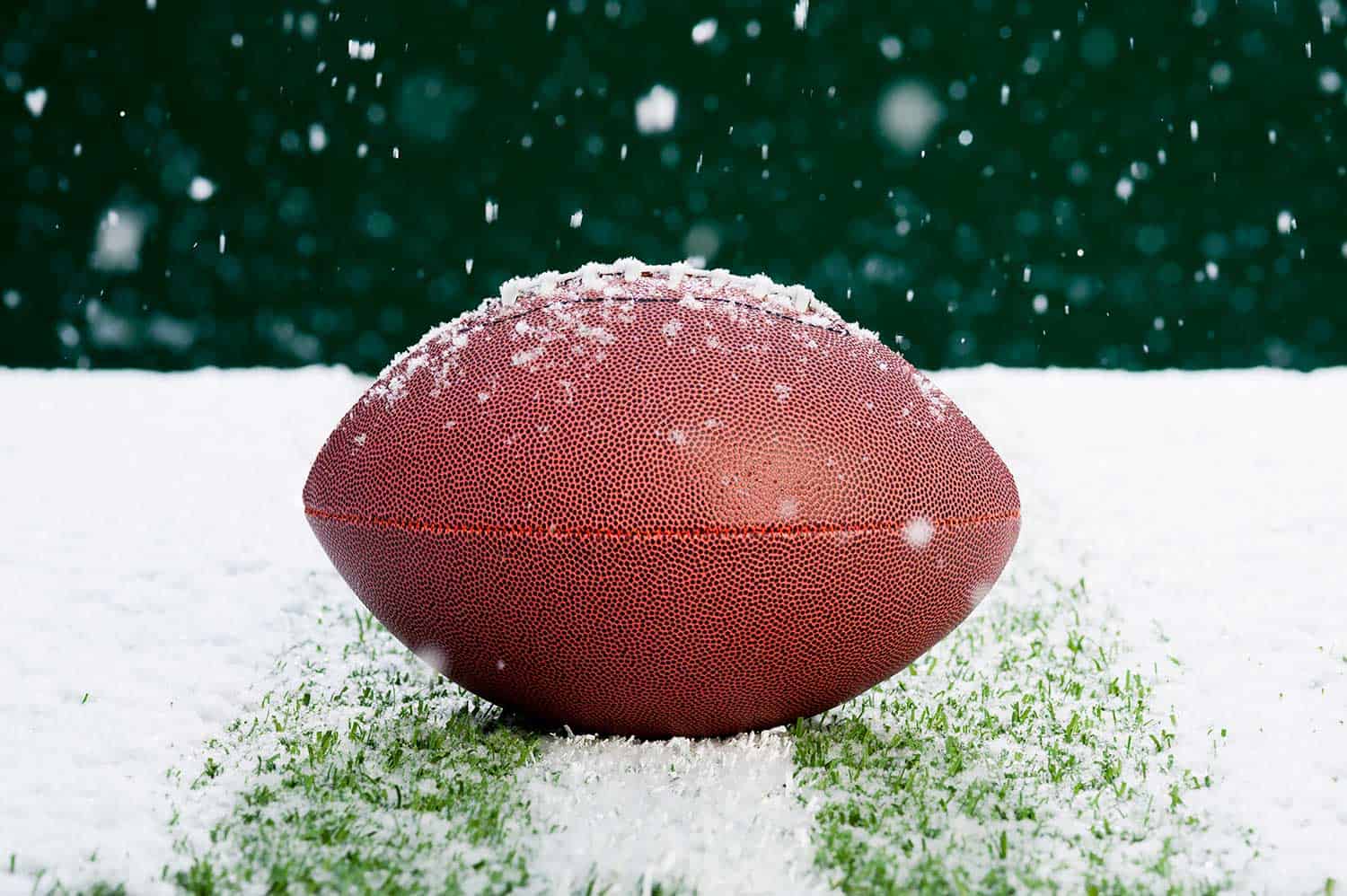 Each stadium has its own system for keeping snow off of the field. But generally, it's by a system of crosslinked polyethylene pipes. Boilers pump water and glycol through this pipe system to keep the ground warm from underneath. This melts all ice and snow that would be on the field.

A field as big as a football stadium takes a lot of care, maintenance, time, and money to upkeep. It costs stadium and team owners a good amount of money to ensure player safety.

But through fast repairs and proper fertilization, these fields will keep their green texture for years to come.

Want the scoop on soccer turf too? Check out "How Big is a Soccer Field? [Inc. Dimensions Chart]."

Are Hiking Boots Good For Walking On Concrete?

What Are Basketballs Made Of? [And What’s Inside Them]

Does Walking Make Your Legs Bigger or Thicker?