Tennis is a fun sport that anyone can play, but it does include a lot of running. So how long and wide is a tennis court? We have taken the time to answer that question in this article.

A competitive tennis court must be rectangular and 23.77 meters or 77.98 feet long by Internation Tennis Federation [ITF] regulations. However, the width for doubles is 10.97 meters, and for singles, play is 8.23 meters. Recreational courts are typically made in the singles play dimensions.

Like any sport, tennis has specific regulations for its court size. This article will look at the dimensions of singles and doubles tennis courts and answer other frequently asked questions about tennis courts. So read on! 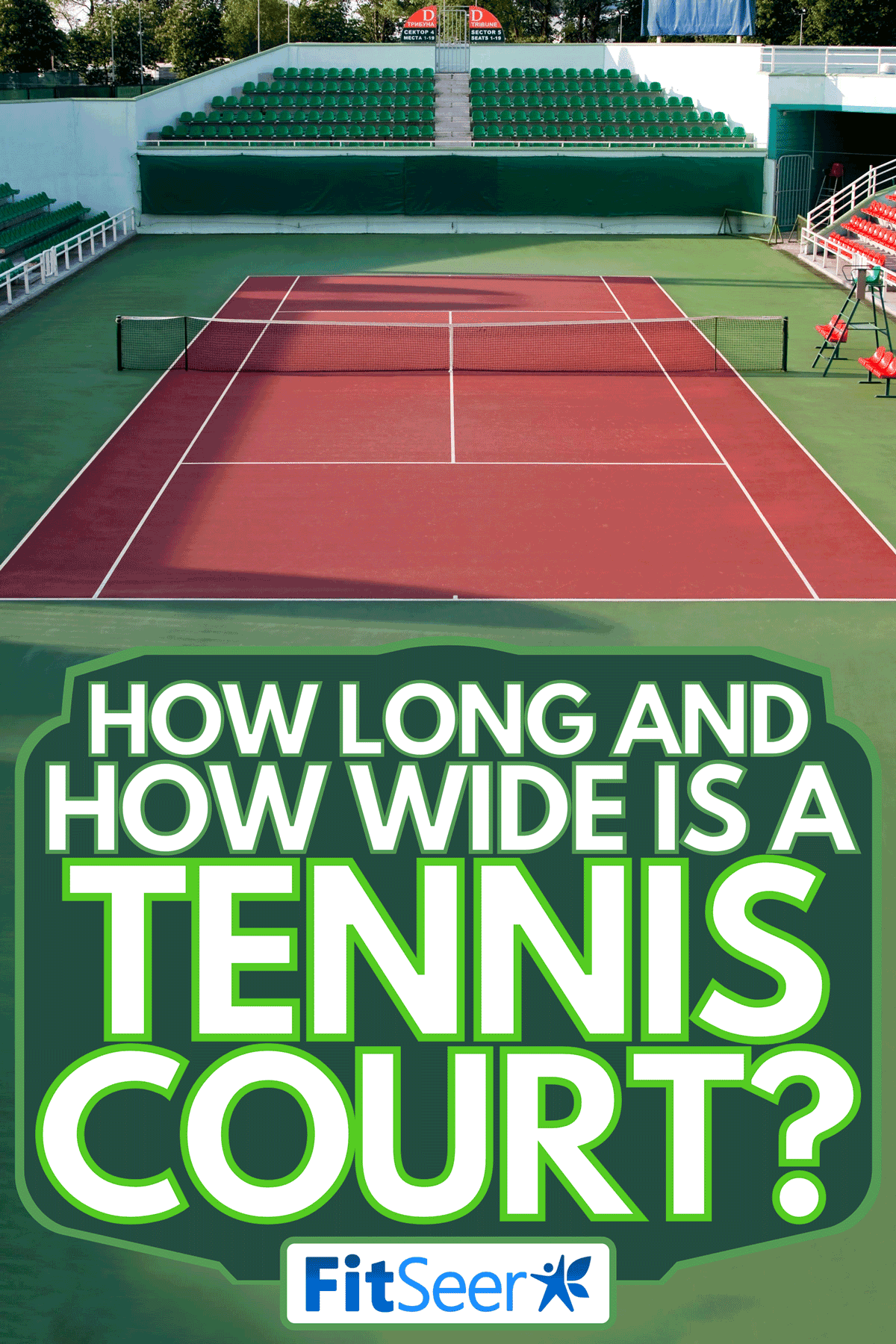 Tennis is a sport between two people [or two teams of two people]. The game's objective is to hit the ball over the net and into your opponent's court in a way that they cannot return it.

The opponent who fails to return the ball is said to have "lost the point." However, if they return the ball in a way that does not allow you to hit it legally [e.g., if your opponent illegally hits it], you are awarded an additional point. The game continues until one player loses the required number of points, usually at least four.

Tennis courts must meet certain specifications according to the International Tennis Federation (ITF). For example, for both singles and doubles matches, the court's width should be 8.23 meters and its length 23.77 meters or 77.98 feet.

For doubles play, the court width is 10.97 meters. Intensity can vary depending on whether it's a clay court, grass court, or another type. The size of the tennis ball is also important to note as well with measurements being 2.5 inches in diameter.

Recreation tennis courts usually take the size of singles courts. This includes the dimensions of 8.23 meters by 23.77 meters. As for the court's surface, many tennis courts are made of asphalt, solid but easy on your joints as you run around the court chasing down balls.

You can still play a doubles match if you choose to on a recreation court. Just be aware that the court will probably not be as spacious, and you may have to play in a position that is not normally used. 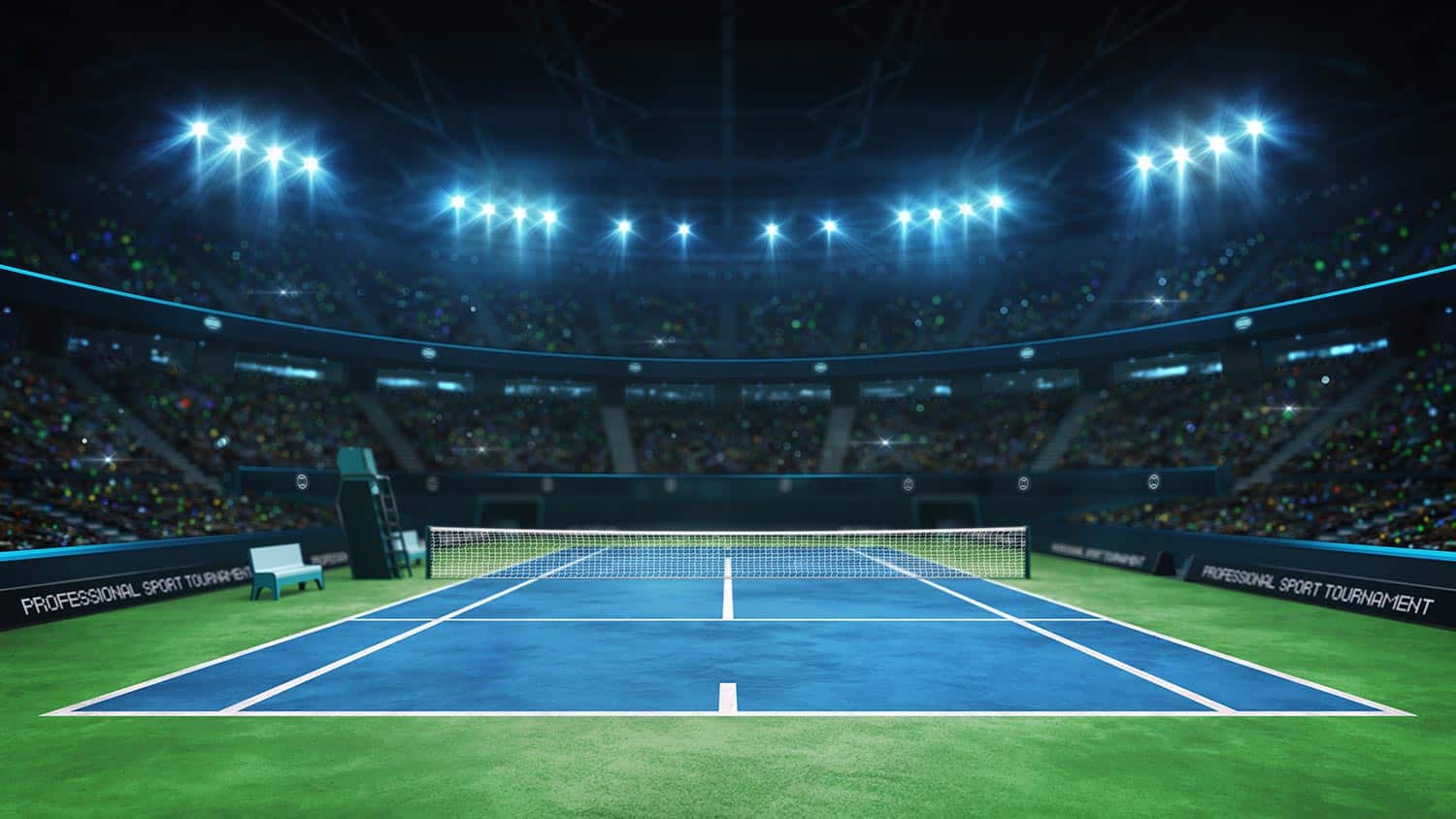 How much room do you need for a tennis court?

Do you need a fence around a tennis court? 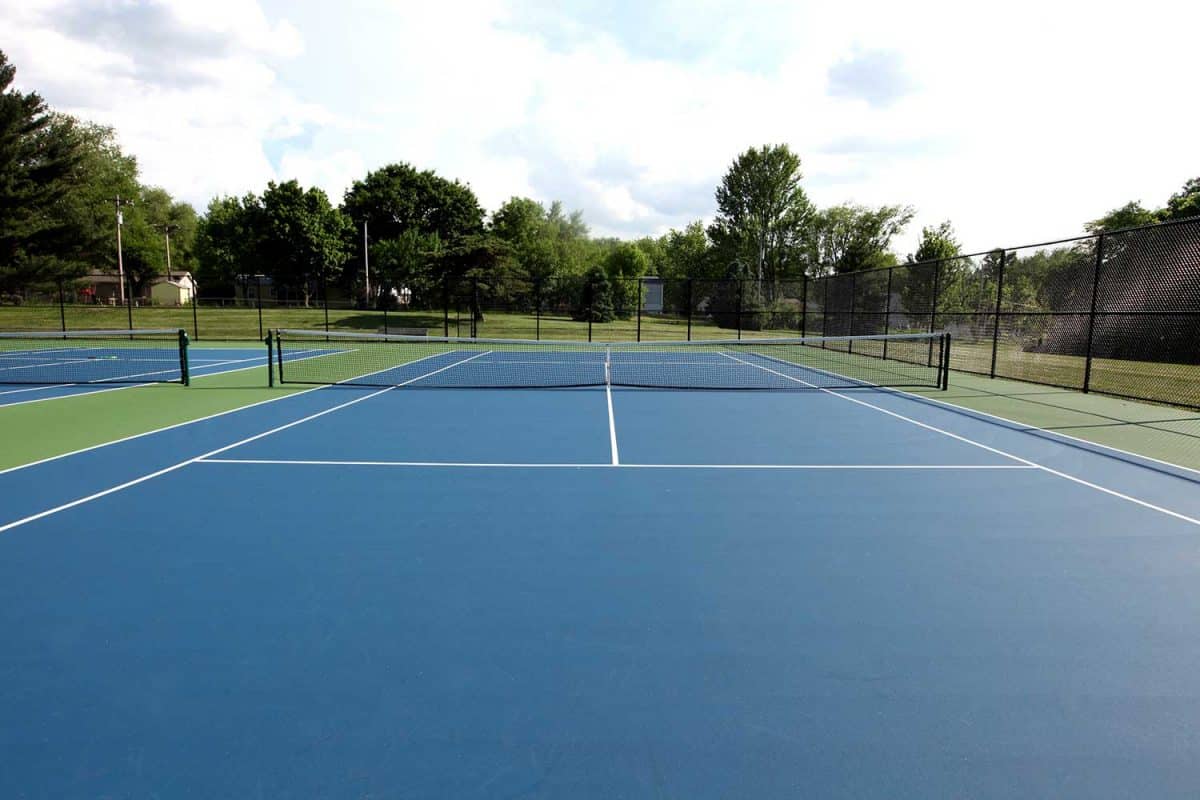 Tennis courts require a fence around them. This rule is a safety precaution as the ball could easily bounce off the court and into a road or another area where someone might get hurt.

The fence must also not interfere with spectators' views or players' shots. An opaque fence is needed for recreational courts, while the fence must be solid for tournament courts.

Are there different size tennis courts?

As mentioned earlier, tennis courts' size varies depending on playing singles or doubles. The only difference is the amount of room needed around the tennis court. As stated above, tournament tennis courts need a larger total square foot space than a standard or recreational court.

How big is a backyard tennis court?

It is recommended to have 7,200 square feet for a backyard tennis court. This provides enough room for serving and hitting groundstrokes. In addition, it is a good size to move around during the match without feeling too confined or cramped.

In addition, you will need this space to provide a fence. You can do a smaller tennis court at your discretion, but it will take out the point of having a tennis court in the first place. 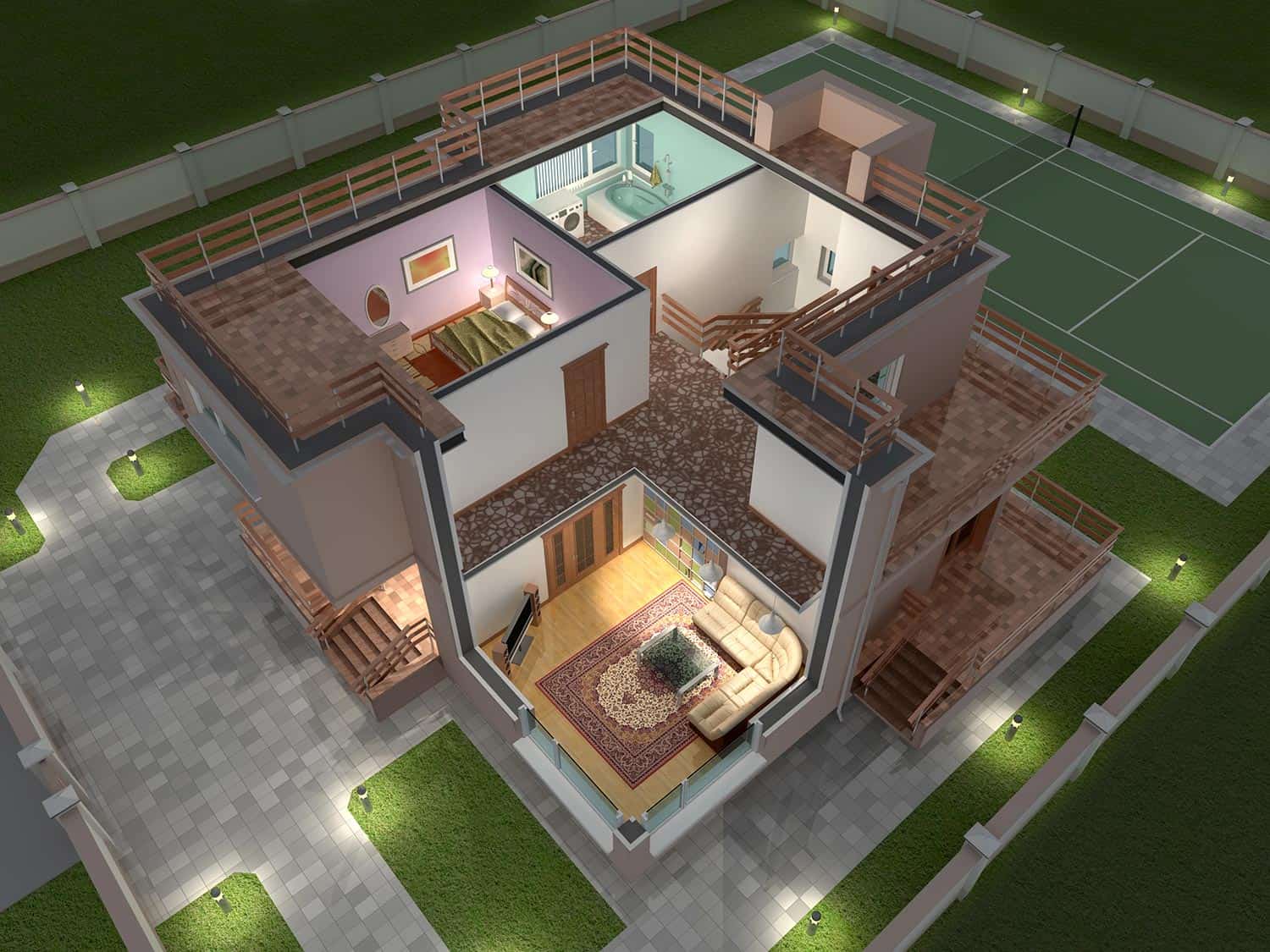 Does a tennis court add value?

Of course, a tennis court adds value to your home. It is an ideal space for you and your family or friends to enjoy spending time outside while engaging in some friendly competition with one another.

Additionally, it can be used if your children are on a school or club tennis team. This way, you do not have to drive to the courts for practice or their games, and they can stay home while keeping their skills up.

In addition, the value of your home may go up due to having a tennis court. The cost to put one in might be hefty upfront, but you might be glad you did in the long run.

Why do some tennis courts look smaller?

Some tennis courts look smaller depending on how they are built. The way they are built includes what the court is made of and its structures. For example, if you have a tennis court made of asphalt vs. clay, you will think you notice a difference in the court's size.

What are the four types of tennis courts?

The tennis court surfaces vary from hard surfaces, clay, grass, and artificial grass. Each surface produces a unique playing style that mostly depends on how the ball bounces and slows down.

Tennis courts made of Indoor Hard Courts can produce a high bounce, while those made of Artificial Grass will generate low bounces. Grass courts maintain an average height bounce as it slows down quickly after striking the surface. Clay is known for its low bounce and slow play.

What's the difference between singles and doubles play?

Doubles play requires a larger area around the tennis court as two more players on the field. In addition, both teams will be using the entire width of the court and need space to run around.

In comparison, singles play is an individual match where one person plays against another one-person team. This means there are only two players on the court at any given moment using the inner rectangle line as the bounds line.

What is the biggest tennis tournament?

The most prestigious tennis match is the Grand Slam, consisting of four tournaments held every year. The matches include the Australian Open, French Open, Wimbledon, and US Open.

These are the four most important tennis tournaments regarding ranking, rules, and history. Winning these events is considered to be a great honor. Out of the four, Wimbledon is the biggest of the tournaments and is held in London, England. 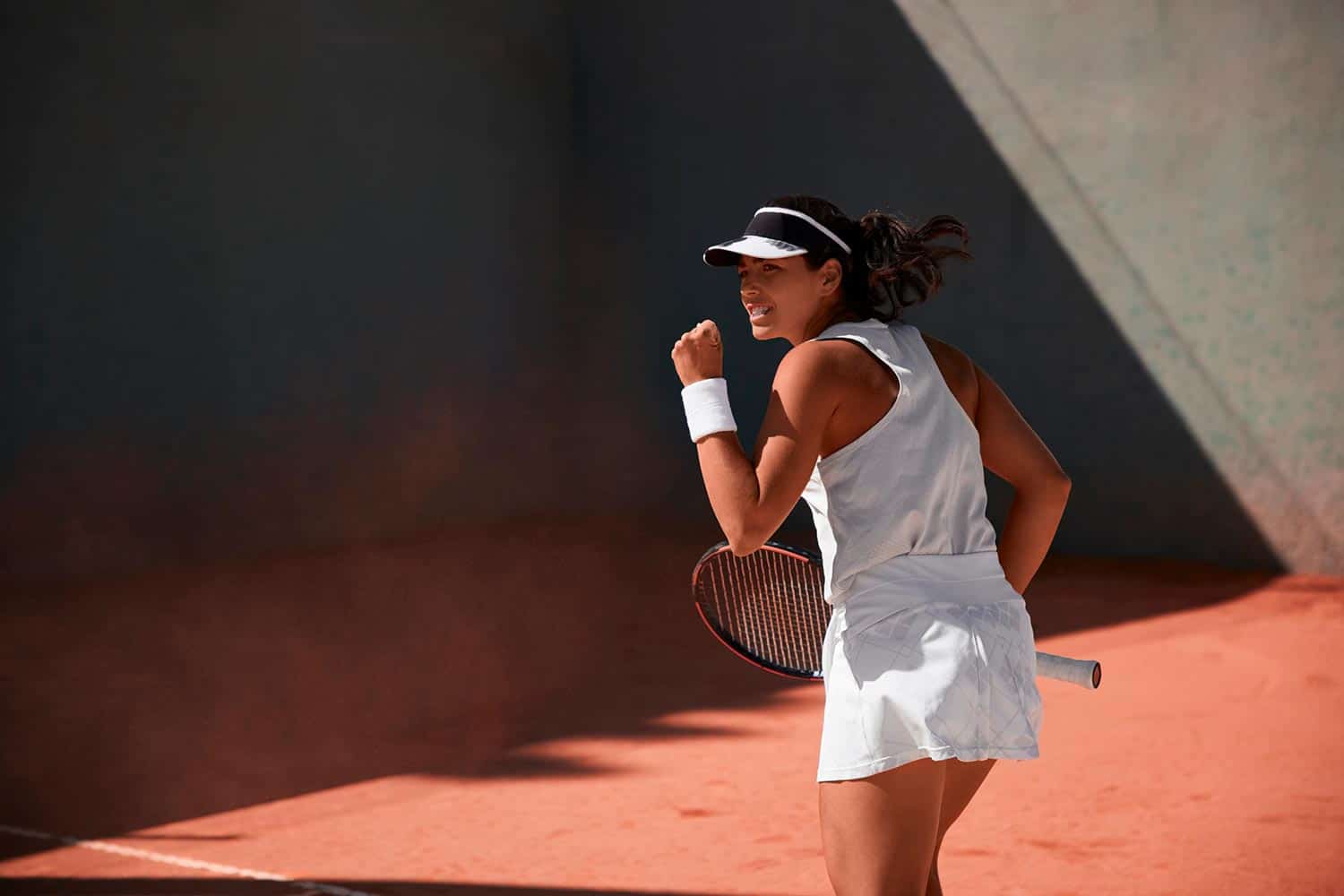 How can you fix a broken tennis net?

A tennis net is used to separate the court into two halves, so having one break could be devastating. Unfortunately, there are no quick fixes or cheap solutions for this problem. The only way to get rid of this issue is by replacing the damaged part with a new one.

Be careful when buying a new tennis net. It is best to get one of the same make and model to avoid any issues with compatibility, which could cause it not to fit correctly. In addition, do not try to fix the net unless you have a high level of expertise in this area.

How long does a tennis ball last?

How much you play will determine the lifespan of a tennis ball. For moderately light play, then a tennis ball can last 1-4 weeks. However, if it is in a professional match, the ball may only last 3-4 hours.

That doesn't mean you can't use the tennis ball for something else, such as playing fetch with your dog. It just means that the tennis ball isn't adequate for tennis play. The reason is that tennis balls are pressurized, and as they are used, they lose their bounce.

Tennis is a fun game that can be played recreationally or competitively. While the size of the court remains the same, the style of the court can vary. Nonetheless, if you are interested in playing tennis with your friends, you can get started for a relatively low price!

For more articles on tennis, check out our website:

How Fast Can A Football Player Run?

How Often Should You Practice Bowling?