Football and rugby are two of the most dangerous high-contact sports—but which one is more dangerous? Although both of these games pose significant health risks, recent studies suggest there might be a “safer” alternative. If you’re curious whether rugby or football is more dangerous, then you should check out the research we’ve done on the topic.

According to the latest data, rugby is more dangerous than football. Since rugby players don’t wear protective gear, they are at a greater risk for cuts, dental trauma, and broken bones. Plus, many researchers now believe concussions are more common in rugby versus football.

If you’re considering playing either of these sports, you can’t afford to miss the safety info we’re about to share. After explaining the dangers of rugby and football, we’ll suggest a few safer alternatives. 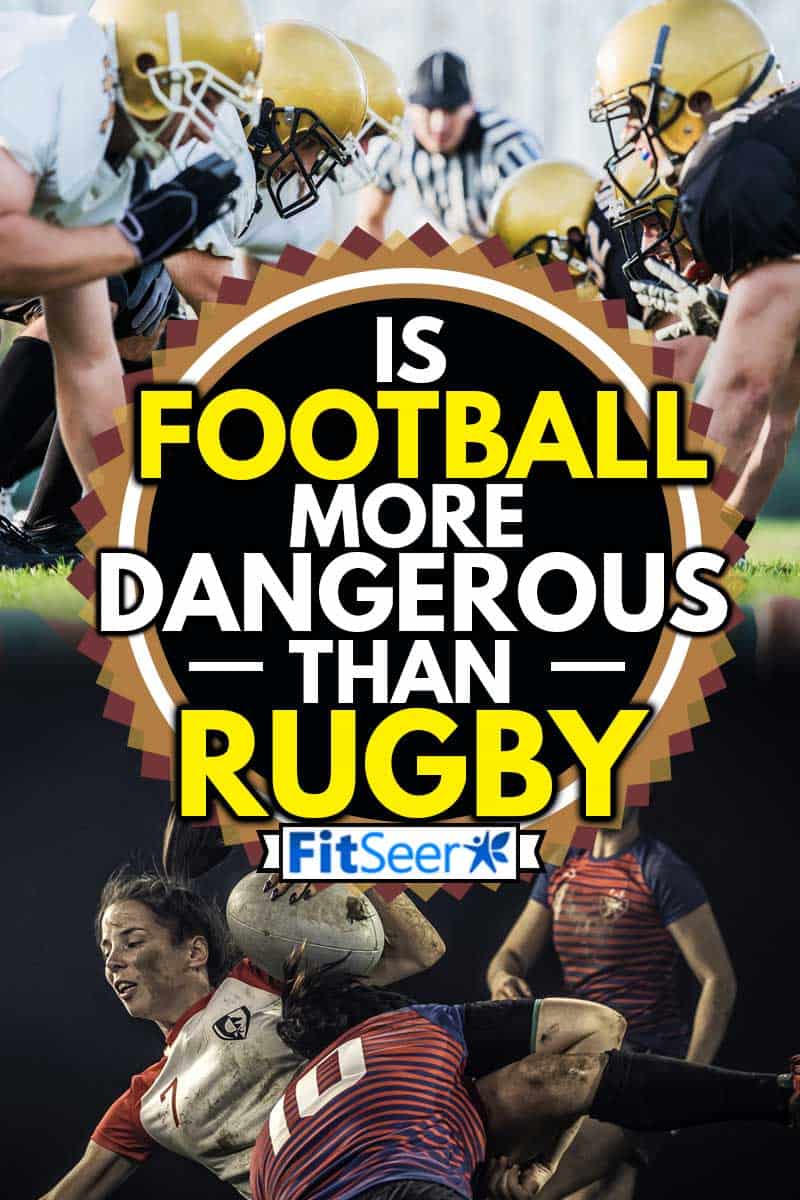 The Safety Hazards Of Football And Rugby

This section will explain why football and rugby are often singled out as the most dangerous sports. As you read the many scientific reports below, you will better understand the risks associated with these games.

Why Is Rugby So Dangerous?

The main reason rugby is so dangerous is because players don’t wear protective gear. Except for a mouthpiece, rugby players don’t have anything to shield them in the event of an accident. Rugby supporters counter this claim by pointing out rules that supposedly reduce the risk of injuries. For example, rugby players have to “wrap up” if they want to tackle another player. It’s also illegal for players to tackle anyone above their shoulders (aka “high tackles”).

Despite these techniques, evidence suggests the lack of padding takes its toll on rugby players. Recent surveys indicate that over 75 percent of amateur rugby players have had at least one concussion. That number goes up to 81 percent when you get into the professional leagues.

If you need more evidence, the Auckland University of Technology also studied injuries in football and rugby. Researchers scoured reports of fatalities and severe injuries from multiple countries between 1975 and 2005. According to their findings, rugby players suffered 4.6 severe injuries per 100,000 athletes. By contrast, football had an average injury rate of 1 per 100,000 athletes.

But it’s not just concussions that make rugby one of the most dangerous contact sports. Indeed, studies out of the UK revealed over 50 percent of pro rugby players will develop osteoarthritis after retirement. There’s also evidence that 65 percent of rugby players suffer some form of orofacial trauma.

If you are going to play rugby, please ensure you wear a mouthguard to prevent severe jaw and dental injuries.

Why Is Football So Dangerous?

In recent post-mortem brain studies, researchers at Boston University found signs of chronic traumatic encephalopathy (CTE) in over 100 NFL players. CTE is an irreversible brain disorder that’s caused by constant blows to the head. The likelihood of developing CTE seems to be most significant in children who start playing football before their twelfth birthday.

Disturbingly, BU scientists also found they could induce CTE in mice by giving them frequent blows to the head. Although the mice didn’t suffer concussions, the long-term brain damage remained.

So, while statistics suggest rugby players experience more concussions, football players still have to deal with long-term health challenges. The toll of these constant “mini-concussions” increases every football player’s risk of neurological issues.

What Is The Most Dangerous Position In Football?

Although every role has its risks, research from the University of Michigan suggests that running backs and defensive tackles are the most dangerous football positions. Scientists arrived at this conclusion after analyzing sensors they placed on NCAA Division I players. Both running backs and defensive tackles appeared to sustain the most substantial G-forces.

On the opposite extreme, offensive linemen and wide receivers did not record as many strong tackles. In terms of defense positions, both linebackers and defensive backs had the lowest amount of high-impact tackles.

How Dangerous Is Youth Football?

Currently, the American Academy of Pediatrics (AAP) doesn’t take as firm a stance against youth tackle football as it does against boxing. Although the AAP says there are risks for permanent brain damage, it also argues the sport could be made “safer” with proper coaching.

Despite the AAP’s wishy-washy attitude to youth football, many prominent doctors believe there are significant negative health consequences. For instance, it’s now estimated that kids who participate in tackle football will double the chance of dealing with a neurological issue in the future.

There’s no denying tackle football will have adverse effects on cognitive health. For this reason, many medical professionals are now encouraging non-tackle alternatives, especially before a child turns 12-years-old.

Although football and rugby are fan favorites, that doesn’t mean they’re the only games in town. Indeed, there are many safer alternatives for athletes who want a less risky way to compete. To help you pick your perfect game, let’s explore how a few sports rank on the “safety scale.”

What Is The Safest Sport?

If you’re looking for a safer alternative to football or rugby, there are plenty of competitive sports you could look into. Indeed, research out of Colorado School of Public Health suggests swimming, volleyball, and track & field are among the safest team sports for high schoolers. Other safe alternatives include softball, bowling, and baseball.

Of course, if you’d prefer to remain active without competing, you could also consider activities like hiking, yoga, or Pilates.

What Sport Has The Highest Injury Rate?

Interestingly, basketball usually has the highest injury rate for any mainstream sport. Recent data suggests that over 570,000 American basketball players suffer at least one injury per year. Commonly reported injuries include twisted ankles, ACL tears, and hip strain. It’s also not unheard of for basketball players to require hospitalization for groin strains or eye injuries.

While basketball has higher injury numbers, keep in mind that more people play this game. Also, the injuries associated with basketball tend to be less severe than other sports. For instance, of the 466,000 US football players injured each year, about 10,000 need to visit the hospital. By comparison, about 8,000 basketball players need hospitalization each year.

If you’re a basketball player, please remember to properly warm-up before every game. You should also wear protective gear like mouthguards, goggles, and knee pads.

Keep Safety In Mind Before Hitting The Field 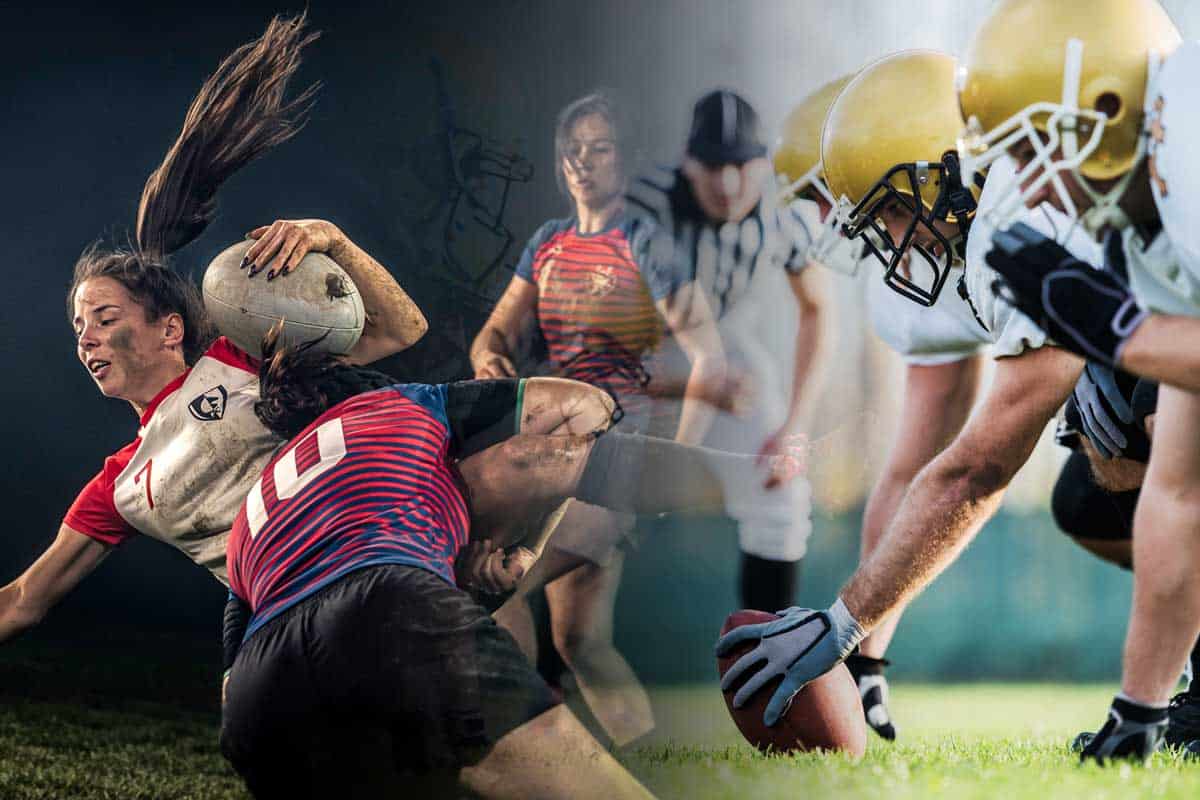 Athletes will always debate whether football or rugby is “more dangerous,” but nobody’s going to argue these sports aren’t rough. While there are significant benefits to playing high-contact sports, please don’t forget to take these health risks into account. We hope the info above helps you make an informed decision before taking to the field.

How Long Does A Reactive Resin Bowling Ball Last? (Compared To Urethane)

How Long Should A Resistance Band Workout Last?

Is Boxercise Good For Losing Weight?

Can You Use Any Boots For Snowboarding?

10 Long Distance Swimmers And Their Records