Tennis is a racket sport that can be played independently against an opponent or with a partner against another set of players. There are many formalities to consider when playing tennis such as warmup serves, calling out the score before serving, or line calls when a ball is out of bounds. It can be hard to remember what is acceptable if you are new to the game. One thing you may be wondering is if the tennis ball has to bounce before you can hit it.

There are essentially two parts of the game; serving and volleying. Before the ball is served, you can bounce it on the ground as a little warmup exercise. After the ball is initially served, the ball must touch the ground once before it can be hit. Once volleying begins, it can touch the other side of the court 0-1 times, but no more, before you can hit it.

Tennis is a game of many rules, and we understand that it can be hard to grasp sometimes. If you still have more questions about the ball bouncing before you can hit it, don't fret. We'll go over the rules in more detail, discuss the layout of the tennis court, and even give some additional tips for hitting the volley. So, without further ado, let's continue. 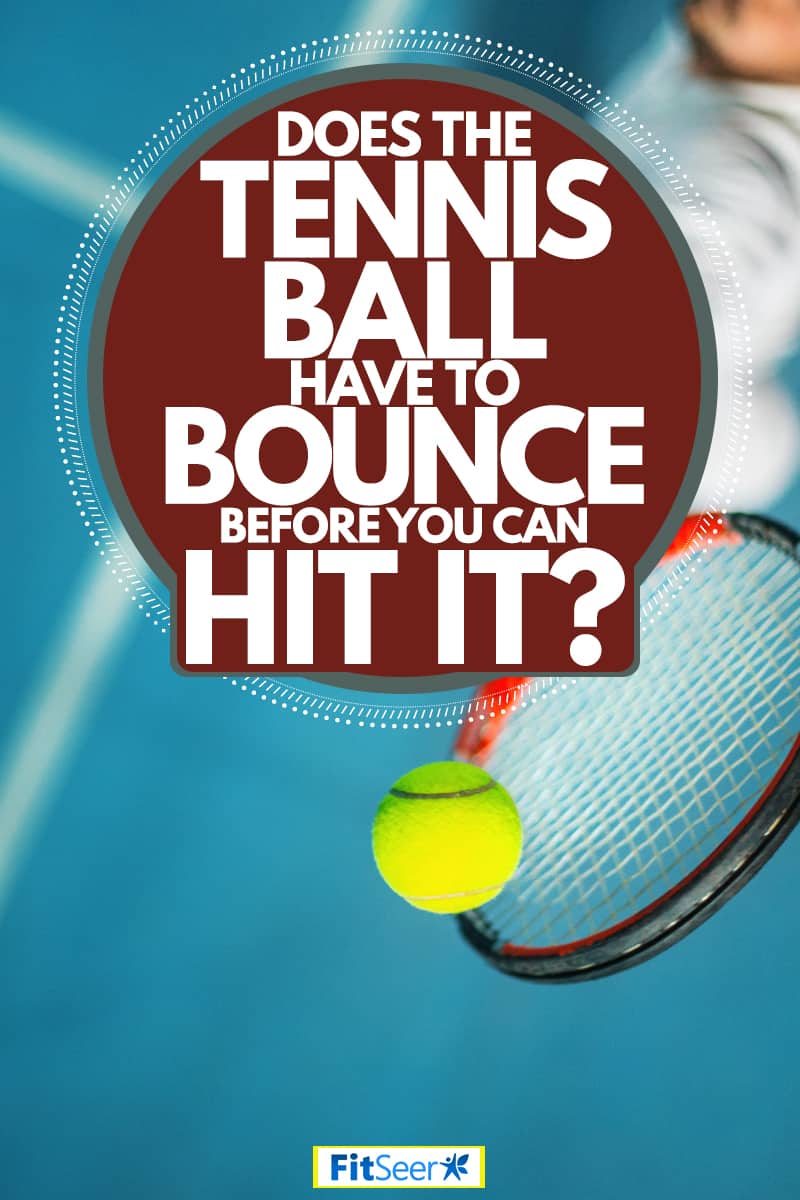 Rules Of The Bounce

As we mentioned before, a tennis match consists of two essential parts: serving and volleying. Service is what initiates the play of the game. The person serving the ball can bounce it on the ground a few times before serving. Players do this muscle memory exercise to prepare for the serve.

After the server hits the ball, the ball must bounce one time on the opposite side of the court before the opposing team or player can hit it back, thus initiating the volley. Once volley play begins, the ball can bounce on the court 0-1 times and no more. Keep in mind that the boundaries of the court depend on if you are playing singles or doubles.

Let's take a closer look at the layout of the tennis court and how that influences boundaries and gameplay.

The Layout Of The Tennis Court

It is important to remember the layout of the court because it is specifically labeled depending on the type of game played and the stage of the game. From an outside perspective, the lines on the tennis court can seem confusing. However, they each have a specific purpose and intent for the game.

Where To Stand When Serving

Where To Stand When Returning A Serve

When an opponent is serving, you will need to stand just above the center mark in the box area known as "No Man's Land." This is the largest box on the court and lies between the service line and the baseline.

It is mandatory to wait for a ball of a serve to hit the ground because it determines if the serve is counted as in or out. Hitting a ball prematurely means that a serve cannot be completed.

Why Do You Bounce Tennis Balls Before Serving?

Understanding how to serve is arguably the most important skill to have when playing tennis. It is how the game begins, after all. You could lose an entire game on your serves alone.

Perhaps you have seen some professional players bounce a ball before serving and wondering if this is a formality. It is. Tennis players tend to bounce the ball before serving to keep a pre-serve routine in place. It is all about muscle memory when playing a sport and tennis is no different.

Check out the following video on YouTube to learn more tips about bouncing the ball before a serve:

What Is Serve-And-Volley Tennis?

Serve-and-volley tennis is a more traditional style of play. This is when the serving player moves quickly to the net after serving in an attempt to hit a volley after the opponent returns the serve.

If you are interested in reading more about this topic, check out this link to discover what other factors have contributed to the downfall of serve-and-volley tennis.

Is A High Volley Important In Tennis?

Traditional volleys are seen smoothly grazing over the net. They are low and fast. The difference between normal volleys and high volleys is, as you may expect, the height.

Hight volleys are strategically used on opponents that are close to the net to get them to run backwards to return the hit. High volleys are informally called 'lobs' because they are hit high above the opponent's head.

To hit a high volley, opponents need to time the falling of the ball. If a volley is returned in the air, an opponent has a choice to hit the ball before it bounces or wait for a bounce and then return it- as long as the volley lands in bounds.

In this case, it is smart to wait for the ball to bounce to see if the player who hit the high volley overshot the ball and therefore loses the point.

What Is A Drive Volley In Tennis?

Similar to a high volley, a drive volley is a kind of return. The drive volley is more aggressive because it is executed as a forehand drive. Forehand drives typically require strong grip techniques and significant drill practices to help determine how to open or close your hips and follow through when swinging your racquet.

Additional Tips For Hitting The Volley

The great news is that there are hundreds of videos and articles out there to help develop skills in tennis. Some offer basic drills to practice on your own time while others are much more complex.

For instance, the following video gives advice in terms of movement. As stated before, hitting the ball before it bounces is really only realistic when volleying. Watch the video to see some tips regarding how to return a hit before the ball touches the court:

Tennis is an ever-evolving sport. The most important aspects to remember are that there are really two parts to the game: serving and volleying. When learning as a beginner, it can be hard to determine where you need to stand when serving or being served. Just remember that the lines on the court are painted to use as a reference in any part of the game.

Before you go, be sure to check out these other tennis guides that may be of interest:

How To Track Pilates On Garmin, Fitbit Or Apple Watch?

10 Long Distance Swimmers And Their Records