Are you wondering where Jennifer Brady, the world-renowned tennis player lives? Well, you're in the right place for answers. We've done the research to provide you with a quick, comprehensive rundown of Jennifer Brady and her life and tennis career.

Jennifer Brady was born and raised in Harrisburg, Pennsylvania, in the United States of America. She now calls Boca Raton, Florida, her home.

Jennifer Brady's outstanding tennis performance is quickly gaining recognition. Her recent matches have shown her to be a promising athlete and certainly a rising star to keep your eyes on. Keep reading to learn more about her, her family, and her tennis career. 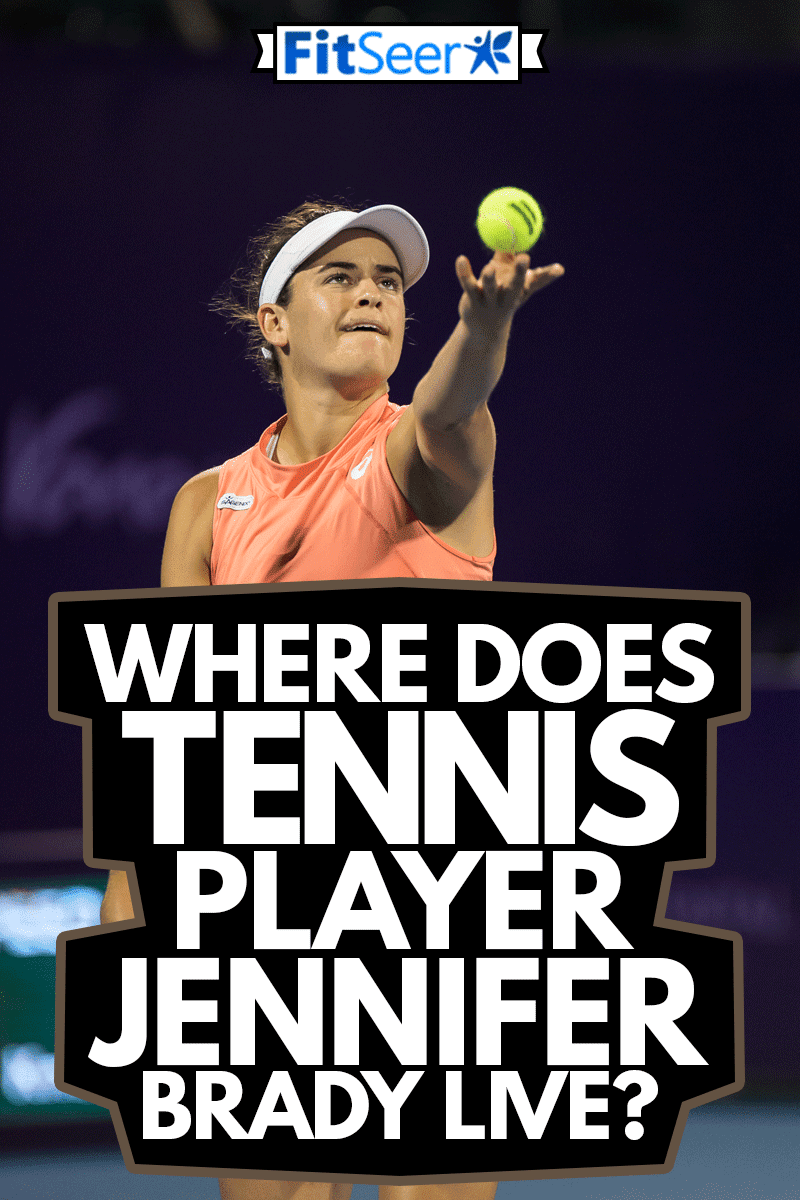 Where has Jennifer Brady Lived?

Brady was born in Harrisburg, Pennsylvania, but her family moved to Boca Raton, Florida, when she was young. She completed high school in Florida and then moved to California to attend college.

Once she completed college, she moved to Germany for training. Brady has since returned to Boca Raton and considers it her hometown. She has continued her tennis training in Florida. 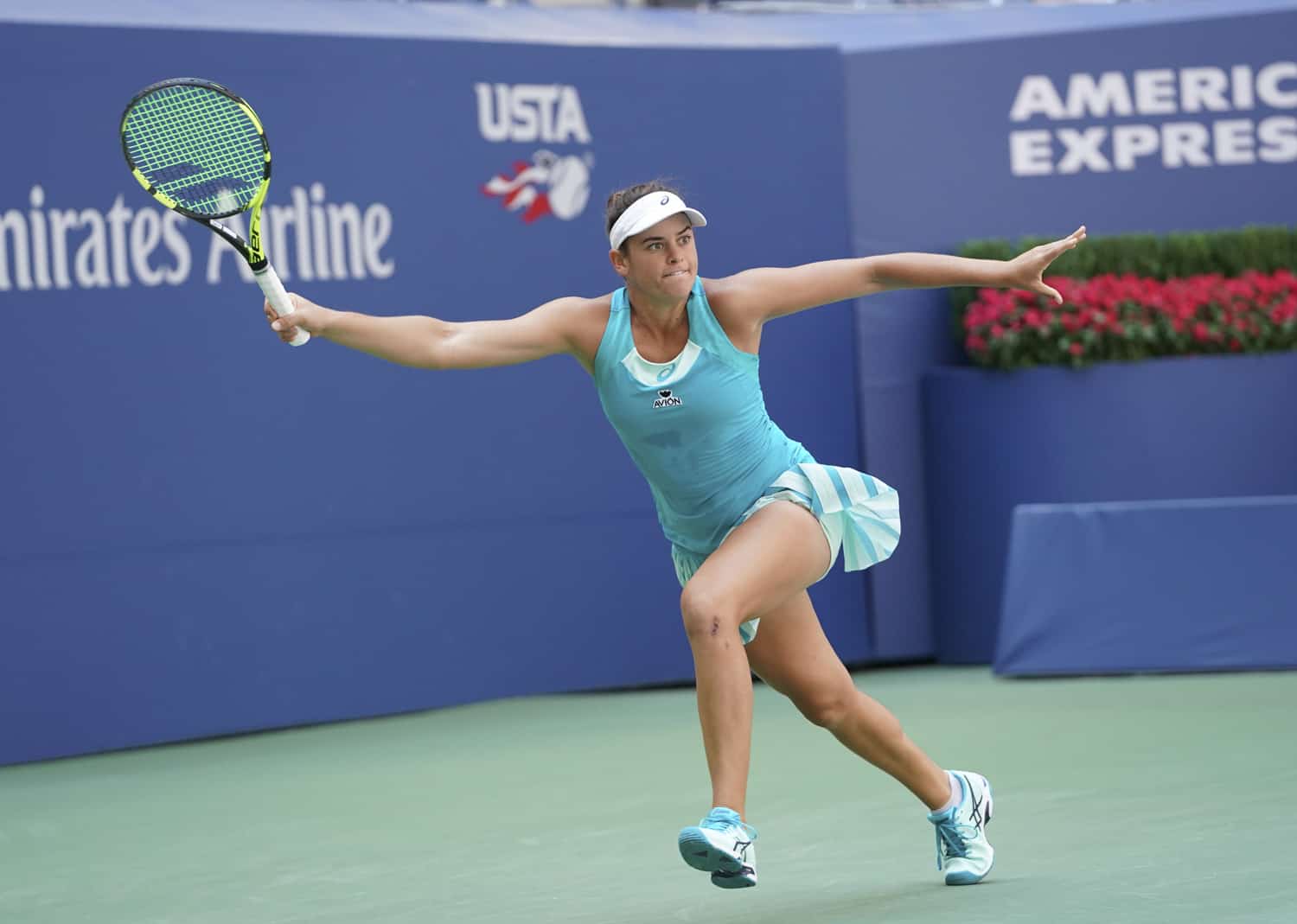 Are Jennifer And Tom Brady Related?

No, Jennifer Brady is not related to Tom Brady in any way. They are both extraordinary athletes, but it has nothing to do with their pedigrees. Dedication, training, and hard work are the only sure way to get to the same level as these athletes, not purely genetics.

Who Are Jennifer Brady's Parents?

Her father is Patrick Brady, and her mother is Elizabeth Brady. Not much is known about Jennifer's parents, which means they prefer their privacy. She also has a twin sister named Jessica, who does not play tennis.

No, Jennifer appears to be focusing on her professional goals at this point in her life. She hasn't shown any signs that she is interested in pursuing any love other than her love of tennis. Her decision to put her career first has begun to pay off in a short time.

Who Is Jennifer Brady's Coach?

According to tennis.com, Brady has been working with coach Brad Stine since early 2021. She was previously coached by Micheal Geserer, who she worked with for a year and a half. When asked why she decided to change coaches, she stated that the relationship had run its course.

Geserer had seen success with a previous trainee, German athlete Julia Gorges. Gorges peaked at world number 12 in August of 2016. Brad Stine has a much longer list of successful trainees, including Jim Courier, Kevin Anderson, and Mardy Fish. Although Geserer took Brady into the spotlight, training with Stine may help her sharpen her game further.

What Racquet Does Jennifer Brady Use? 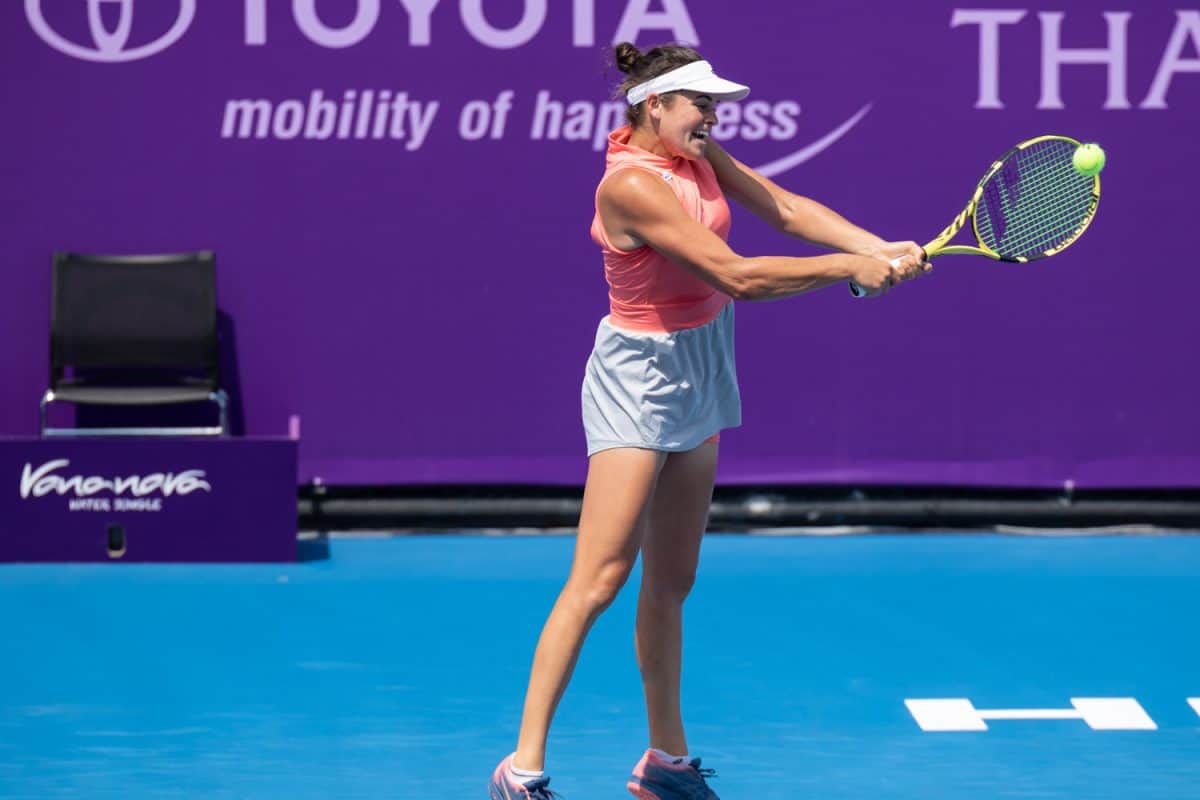 Jennifer Brady uses a Babolat Pure Aero racquet; she has been officially endorsed by the Babolat brand. Babolat is a great brand for those who take the game seriously. Babolat scouted Brady at the young age of 12 years old, and she has been happily playing with their racquets ever since.

The Babolat racquet was designed for professional players, but it also works as an excellent beginner's racquet. This racquet is available in multiple grip sizes for the perfect fit.

What Clothing and Shoes Does Jennifer Brady Wear?

Jennifer is endorsed by Asics brand clothing and shoes, and she exclusively wears them on-court. Asics specializes in athletic wear, making excellent and super trendy gear. Having a great pair of tennis shoes and comfortable, flexible clothing can make all the difference in your tennis game.

These tennis shoes are specially designed for excellent grip on the court, and they're gorgeous. They're also available in different colors.

Click here to check these tennis shoes out on Amazon.

What Other Endorsements Does Jennifer Brady Have?

Brady has been endorsed by Tequila Avion, a high-quality tequila brand. ATP Labs, a nutritional supplement company, has also endorsed her. These are the only four endorsements Brady currently has, but she will surely be approached with more offers if she continues to challenge herself. 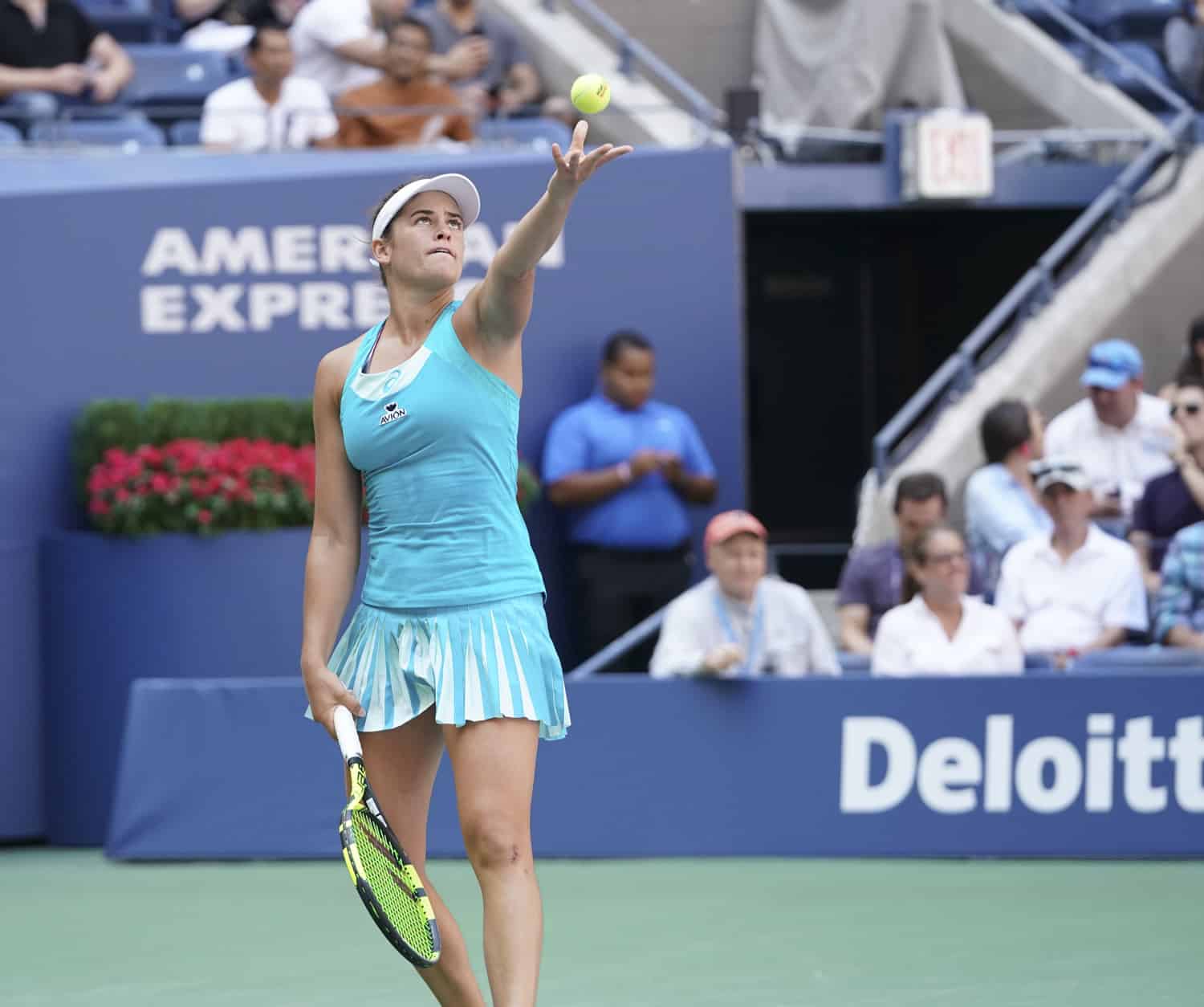 How Old Is Jennifer Brady?

Jennifer is 26 years old and has played tennis since she was just eight years old. She has had a passion for the game since a young age and took it very seriously. Clearly, it paid off, earning her quite a few huge wins at such a young age that she is becoming a sensation in the sport.

What College Did Jennifer Brady Go To?

Jennifer Brady attended The University of California, Los Angeles (UCLA) to complete her education while continuing to follow her passion for tennis. After college, she moved to Germany to continue honing her tennis skills with coach Geserer. With Geserer's guidance, she entered the spotlight with her first pro match.

Jennifer played two years of college tennis with UCLA's team, the Bruins. She ended her freshman year ranked number 8 nationally in singles and number 1 in doubles. She led the college team through multiple victories and became a tennis icon.

She ended her sophomore year number 8 nationally in singles and number 11 in doubles. After completing her two years of college, she began seeking coaches to help her improve.

How Much Does Jennifer Brady Weigh And How Tall Is She? 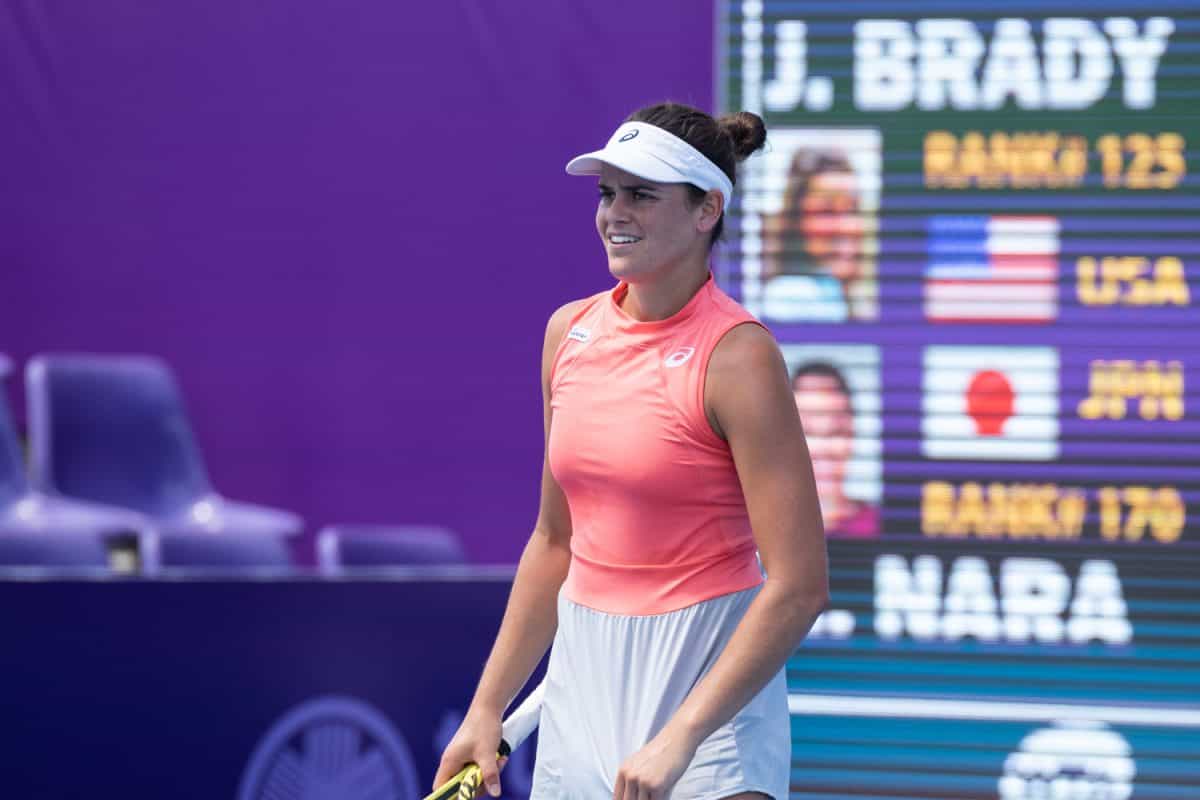 Bradys weighs in at 149 pounds and stands 5-feet and 8-inches tall. This gives her an athletic build with some muscle behind it, perfect for tennis. She eats healthy and tries to stay away from junk food.  Brady trains six days a week, giving her plenty of activity to keep in top shape.

What is Jennifer Brady's Playing Style?

Brady is a strong player with a powerful serve recorded at top speeds of 114 miles per hour. She excels at blocking opponents from scoring free points. She has a strong forehand that produces a heavy topspin and a two-handed backhand that has been highly productive during her matches.

When Did Jennifer Brady Turn Pro?

Brady went pro at the 2014 U.S. Open, where she was drawn as a wildcard. She followed up her debut by winning four singles and five doubles on the ITF Women's Circuit, drawing international attention. She reached the semi-finals in the 2015 Carlsbad Classic, and in 2016 she reached the quarterfinals in the Guangzhou International Open.

In 2017 Brady participated in the Grand Slam Tournament at the Australian Open, winning three matches. In the same year, she participated in the French Open, Wimbledon, and the U.S. Open. 2020 was Brady's biggest year yet, with multiple wins against some of the world's top players.

Has Brady Competed In The Olympics?

In 2021 Brady participated in her first Olympic game. Unfortunately, she was defeated by Italian player Camila Giorgi in the first round. Making it to an Olympic game is still a huge accomplishment and something to be celebrated.

Why Did Jennifer Brady Retire?

Jennifer Brady was forced to retire from the 2021 U.S. Open due to a foot injury. She has not completely retired from the sport. It is a temporary leave so she can take time to heal. Rest assured that Brady will be back on the court before long.

How Much Is Jennifer Brady Worth? 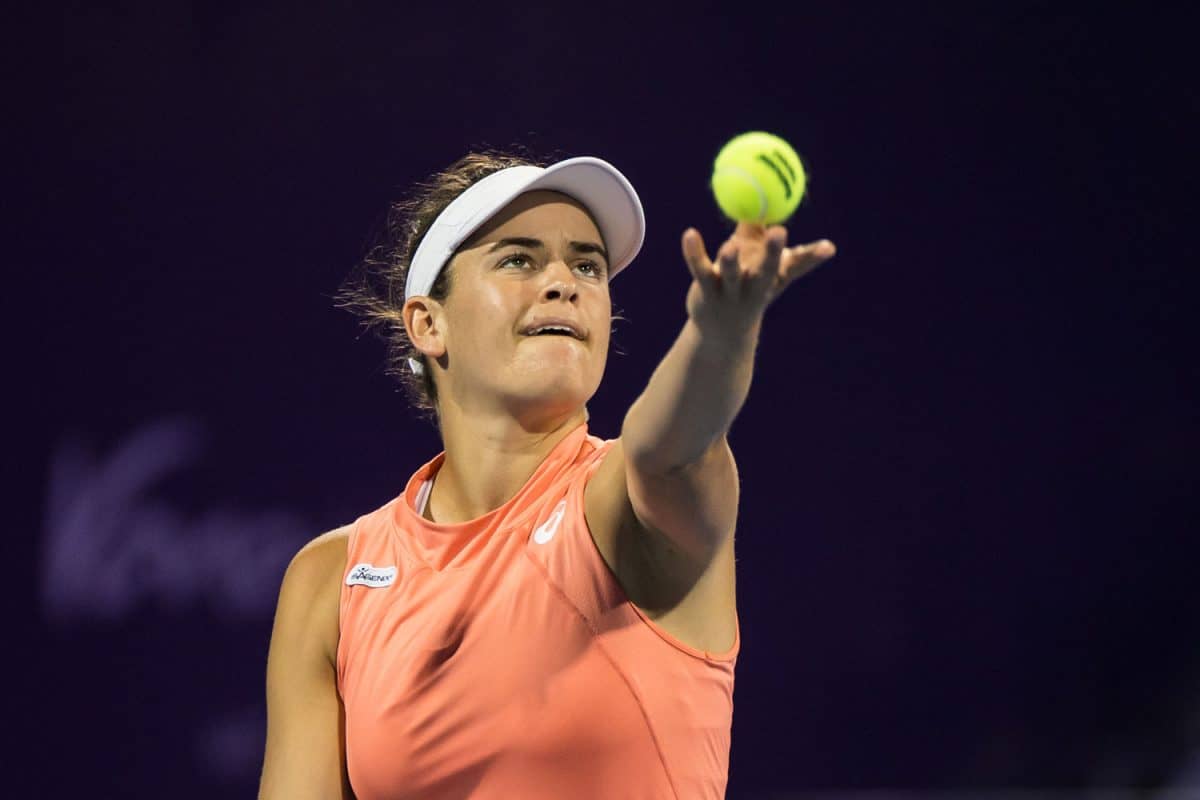 Brady's tennis career has amassed a prize money total of $4,405,195. Tennis appears to be her primary source of income at this point in her life. With such an amazing start to her tennis career, she will surely see that number increase substantially as she improves her ranking.

Yes, you should keep your eye on Brady. She is already making waves in the game at a young age and has some major wins considering her fairly short career so far. With her new coach helping her to push herself to new limits during the game, as well as her dedication to the sport, she is sure to continue improving.

Now that you know all the facts about this rising star, you're ready to impress your friends with your player knowledge. Keep a close eye on Brady, she has the potential to make it to the top, and she's making her way there. Let us know what you think of her in the comments.

You May Also Enjoy

If you're looking to improve your tennis game, learn more about the tools of the sport by reading our article "How Long Is A Tennis Racket?"

If you want to learn more about the rules and regulations of tennis, read our article "Do You Have To Serve Overhand In Tennis?"

Should Football Gloves Be Tight Or Loose?

How Do You Keep Hair Dry While Swimming?

How Much Does CrossFit Cost?

Can You Use Windex On A Bowling Ball?