Squash is a fun game played with racquets and a rubber ball. Its court is a very specific size with complex but important dimensions. If you're looking for a court, you might be wondering what the dimensions should be.

A doubles squash court is different:

There are many other important dimensional elements of a squash court that must be considered like service lines, tin lines, front wall lines, side wall lines, and back wall lines.

This is an overwhelming amount of numbers because squash is a highly specific game, but rest assured that we've done the research to help you understand the dimensions of a squash court. Continue reading to learn more about how a squash court should be laid out for both singles and doubles competitions. 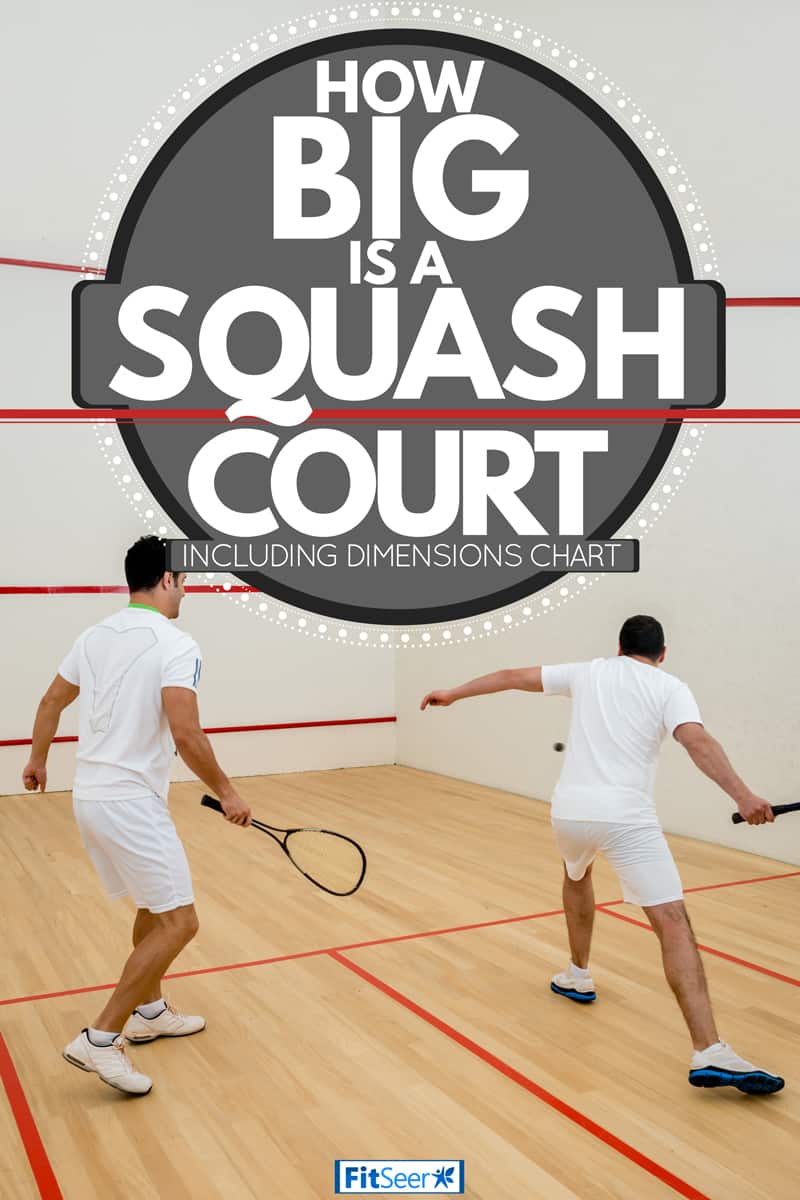 A squash court, like the singles version pictured above, has a series of lines on the floor and walls that form the "out of bounds" areas for the players' shots. A ball struck by a player must hit the wall within the bounds of the lines, or the offender forfeits the point. The lines on the court are usually five millimeters across.

When serving (initiating the point), a player must stand in the right or left service box and strike the ball toward the front wall. Their serve must hit the front wall somewhere between the front wall line and the lower service line. After striking the front wall, the ball must cross the short line before being returned by the opponent.

The service box on a singles court is a 1.6 meters by 1.6 meters square. This is where the server must be when he or she strikes the ball with the racquet to serve. On a doubles court, the service box is a curved angle with an area of 1.37 square meters.

The tin is a strip at the bottom of the front wall that is always out of bounds. No serve or hit is allowed to touch the tin.

There is no specified height that a ceiling has to be on a squash court, but it is recommended that the ceiling be at least 5.64 meters high for singles or 7.31 meters high for doubles. This is to allow the ball plenty of clearance before hitting the wall. If the squash ball hits the ceiling, it is immediately out of bounds and a point is given to the player's opponent.

How Many Walls Are There On A Squash Court?

There are four walls on a squash court, although not all space on the wall is allowed to be used. Any space above the lines on the front wall, side walls, and back wall is out of bounds.

The front wall and side walls of the court are made out of particle board with a smooth finish. The back wall is made out of reinforced glass and has a door by which players can enter.

What is the area of a squash court?

Why is a doubles squash court bigger?

A doubles court is designed to be played with two teams of two players each who alternate hitting the ball. Thus, it is important that there is more space for the players to be able to maneuver. Additionally, there is more inbounds space on a squash court for a player to hit the ball, since it is easier for two players to return a shot than one player.

There is a much less popular type of squash called "hardball squash." This version of the game is played with a harder ball that bounces farther. A hardball squash court is the same as a doubles squash court. Though mildly popular at one point in the early twentieth century in the United States, hardball squash is rarely played nowadays.

Can you play singles on a doubles squash court?

These aspects make it more difficult to play singles on a doubles court. Though it would be possible, it is not recommended.

Alternatively, you can play doubles on a singles court, though it will be tougher for four players to maneuver around the court due to the lack of space.

Trying to decide which shoes are best when playing squash? Check out Are Tennis Shoes Non-Slip?

Can you play squash outside?

The dimensions and setup of a squash court are very important, as the game would change at the slightest adjustment of the court.

Squash is mainly played indoors, though you might be able to find outdoor courts at some parks around the world. This is unusual, however, because squash is designed to be an indoor game. Most major tournaments are played indoors.

Because a squash court contains four walls, it makes more sense and is easier to construct it inside a building with a roof, rather than building four new walls in the open air. Players frequently use all four walls to bounce the ball off, so it's important that a court has no fewer than four walls.

The roof is also important to protect the court from natural elements such as rain and sunshine since a squash court's floor is often made out of hardwood and its walls are made out of particleboard.

Around the world, squash is often played in the winter. In the cold air, the squash ball becomes harder and does not bounce the same way. An indoor squash court can be heated and protected from the weather, allowing players to enjoy the game year-round.

If you're looking for a similar game to squash that you can play outdoors, check out this article about tennis!

Now grab a friend and a racquet and have fun!

Is Baseball Harder Or Easier Than Softball?

Can You Grow Your Glutes With Resistance Bands?