Football referees are responsible for ensuring the game runs smoothly. They keep players safe, enforce the rules, and accurately judge the game. Because of this, they must be able to see correctly. But is it okay if they wear glasses to do that? We've researched this topic and have come up with the answer.

Football referees can wear glasses. There are no rules against it and no real danger to the referee's safety. However, since football officials are expected to run and move quickly, they might want to invest in some athletic glasses or contact lenses.

You might be surprised by all the equipment a football official uses in addition to any vision correction. We'll describe and explain all of it below. Here we go! 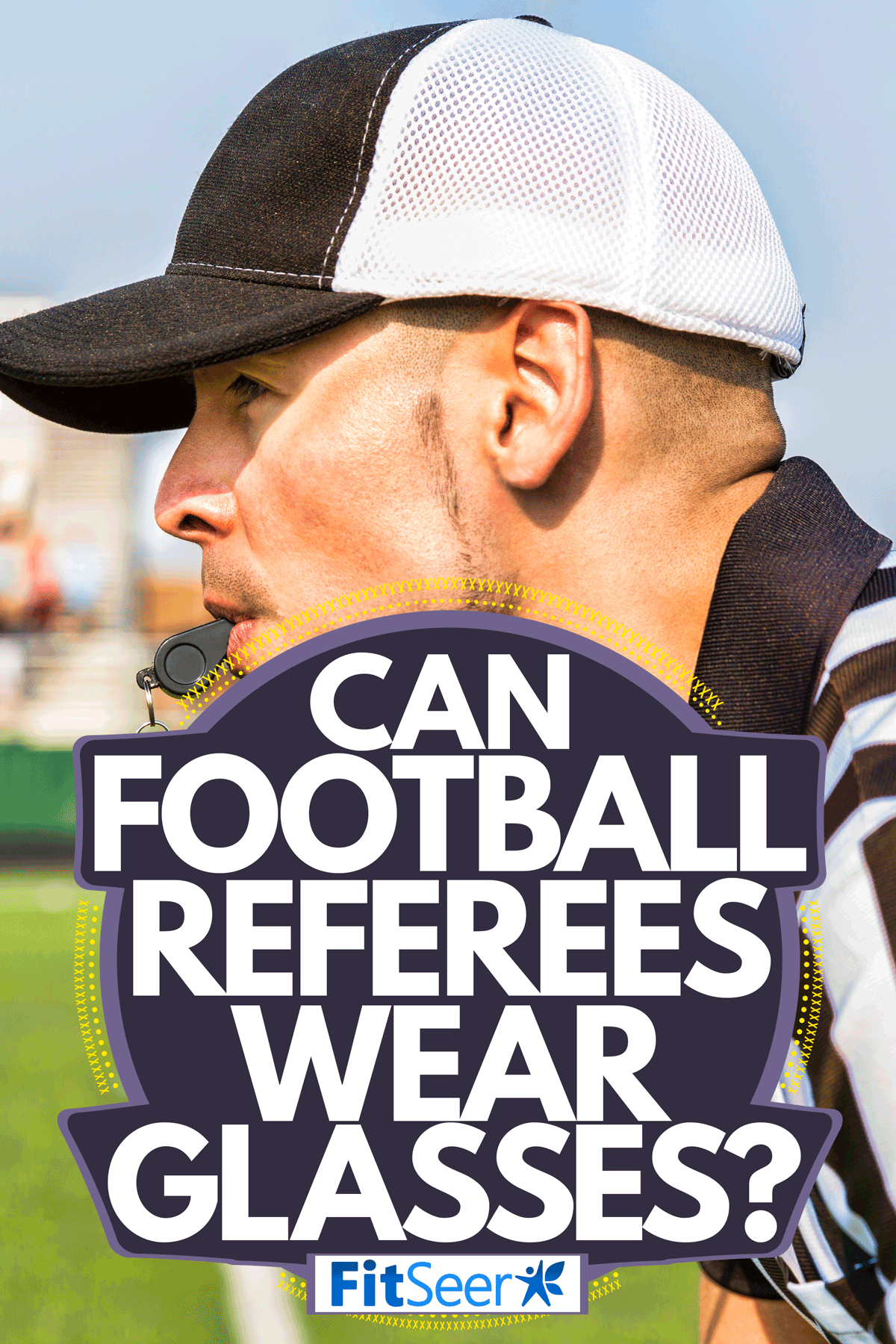 However, some of the seven officials on the field should beware of getting run into by a player. For instance, the Back Judge is positioned down the field on the defensive side of the ball. During a play, the players might come in his vicinity, including from his side or back. Rarely will a Back Judge get hit by a player, but it is possible. The Umpire and Referee are positioned in the backfield, so while they are less likely to come into contact with a player, it's still possible.

Plus, officials are responsible for keeping up with the play, which means running down the field at a quick pace. Occasionally, they also have to change directions quickly. Also, many officials sweat over the course of a game. For these reasons, plus the small likelihood that they will come into contact with a player, many officials who need corrected vision opt for rec specs or contact lenses. Normal eyeglasses can fall off your face when shaken. Or, if hit by a ball, the glasses could cause serious injury.

Rec specs -- short for recreation spectacles -- is the colloquial term for vision-correcting goggles. Most rec specs are specially made for an individual's prescription. However, some are designed to go over the top of eyeglasses.

What equipment do referees need in football?

Like most professions, football officiating requires a host of tools to do the job well. Here are an explanation and description of each piece of an official's equipment.

One of the most recognized uniforms in all sports is the football official's black and white, vertically striped shirt. Different football levels use slightly different specifications, but all of them include the abbreviation of the official's role in large letters on the back. Most high school officials' shirts have one-inch-wide stripes, while college and professional shirts are two inches wide.

The pants worn by officials are black and full-length and often have a white stripe down the side. Some high school officiating groups still wear the classic white, knicker-length pants with high black and white or stirrup socks. However, the NFL and most collegiate officials switched to the looser black pants starting in 2006 to allow officials to wear warmer layers underneath.

The outfit is completed with black shoes and a black belt. The shoes are comfortable athletic shoes akin to turf shoes like the ones below.

Why do referees wear black and white stripes?

Referees and other officials wear a black and white striped shirt so that they are easily and quickly recognized on the field. This keeps them safe from injury but also helps players and spectators differentiate them in their minds. The vertical stripes and contrasting colors aren't worn by any teams.

When football was created, officials didn't have a standard uniform but mainly wore white shirts and bow ties. This changed in the 1940s when striped shirts were introduced. Since then, the uniform has not changed drastically, undergoing only minor evolutions.

Hat (black or white, depending on position)

Officials are also expected to wear a baseball cap. The referee, who is in charge of the crew, wears a white cap to differentiate them from the other positions. The other officials wear a black cap with white piping like the one below.

Why do NFL referees throw their hats?

In addition to distinguishing which official is the referee and keeping the sun out of their eyes, hats are also used by officials during the course of the game. There are a few explanations for why an official would do this.

The first and most common is to mark where a player steps out of bounds without the ball. If the player were to not establish himself back in bounds before touching the ball or were the first to touch the ball after establishing himself, it would be a penalty from the spot where he went out of bounds. This most often happens when a receiver runs a route along the sideline. The play is not guaranteed to be a penalty, which is why the official doesn't throw the flag. However, if a penalty is committed later, the spot of the foul would become important.

Secondly, an official might use his or her hat to mark a penalty if they have already thrown the flag. Most officials nowadays carry two flags, so this has become less common. An obscure rule is that if an official calls a personal foul that has been committed against him or herself, the hat is immediately thrown instead of the flag.

Football referees and officials have a whistle that they use to start play, stop play, and get the players' attention. Most officials hold the whistle between their teeth to keep their hands free to find their flag, bean bag, and down indicator quickly.

What kind of whistle do NFL referees use?

Most officials use a Fox 40 Classic Whistle like the one pictured below. These whistles can get up to 120 decibels, which is important for officials to be heard above the roar of the crows.

Did you know NFL games can end in a tie? They can! Read this article for details: "Can Football End In A Tie? [Here’s When This Can Happen]"

The official's flag is used to signify that a penalty has been committed. Instead of stopping play each time a player does something illegal, the official throws a flag at the location. This lets the play continue so that if the non-offending team does something positive, the penalty is usually ignored.

These flags are made out of a bright yellow material so that it can be seen clearly. This material is wrapped around a weight of some sort, usually beans or sand. The weight helps the flag go where the official aims it, as this is often important when determining where the foul occurred.

Most officials carry two flags in case they have to mark two fouls on the same play. After the flag is thrown, the official tells the referee why it was thrown and what infraction was committed. The official will then pick the flag back up and put it on his or her belt where it can be easily reached.

Even though football is a contact sport, there are times an official needs to throw the flag. Check out this article for more details: "Is Football A Contact Sport?"

Officials also carry a small, dark blue bean bag. This is used to mark potentially important spots on the field during the course of play. For instance, an official will throw the beanbag at a fumble location or where possession was gained on a punt. Occasionally, a penalty will be based on the fumble or punt recovery spot, so it's important that the spot be recorded.

Click here to view this bean bag on Amazon.

Thus, the officiating crew needs to know what the down is at all times. They use a down indicator for this. The down indicator has a wristband, plus an additional loop that goes up the back of the hand and around whichever finger corresponds with the correct down.

In this picture, the official is showing first down. On second down, they will move the loop to the middle finger, and so on, toward the pinky. This is simply to help the crew remember which down it is currently.

Click here to view this down indicator on Amazon.

There are no rules that say that a football official cannot wear glasses. However, for the sake of simplicity, a football referee might want to wear sports goggles or contact lenses. In addition to whatever vision-correcting tools an official needs, there are several other tools he or she carries on the field. Hopefully, this article has helped you understand all the equipment an official might use.

Do Football Helmets Expire? How Long Do They Last?

Should Football Gloves Be Tight Or Loose?

How To Clean The Inside Of A Baseball Glove? [5 Steps]

Are Hiking Boots Good For Walking On Concrete?

Can You Wear A Bike Helmet For Skiing?