If you wear glasses, you know how easily they break and how expensive they are to replace. You also might know how painful it is to be hit in the face while wearing them. However, you also know how difficult it is to do any activity without them. So what should you do when you want to compete in a contact sport or other physical activity?

Wearing glasses while playing soccer is not recommended because of the potential for injury or for the glasses to get broken. Getting hit in the face by another player or the ball is more dangerous when wearing glasses, as broken glasses could cause major injury. If you need an alternative to glasses, try contact lenses, polycarbonate frames, or sports goggles.

If you're one of the millions of people around the world who wear corrective lenses, you might be intimidated by this recommendation. But don't worry, we've done the research and can help you play soccer with the clearest vision possible.

Read on for more details on why you shouldn't wear glasses while playing soccer, alternatives to eyeglasses, and other common questions about the topic. 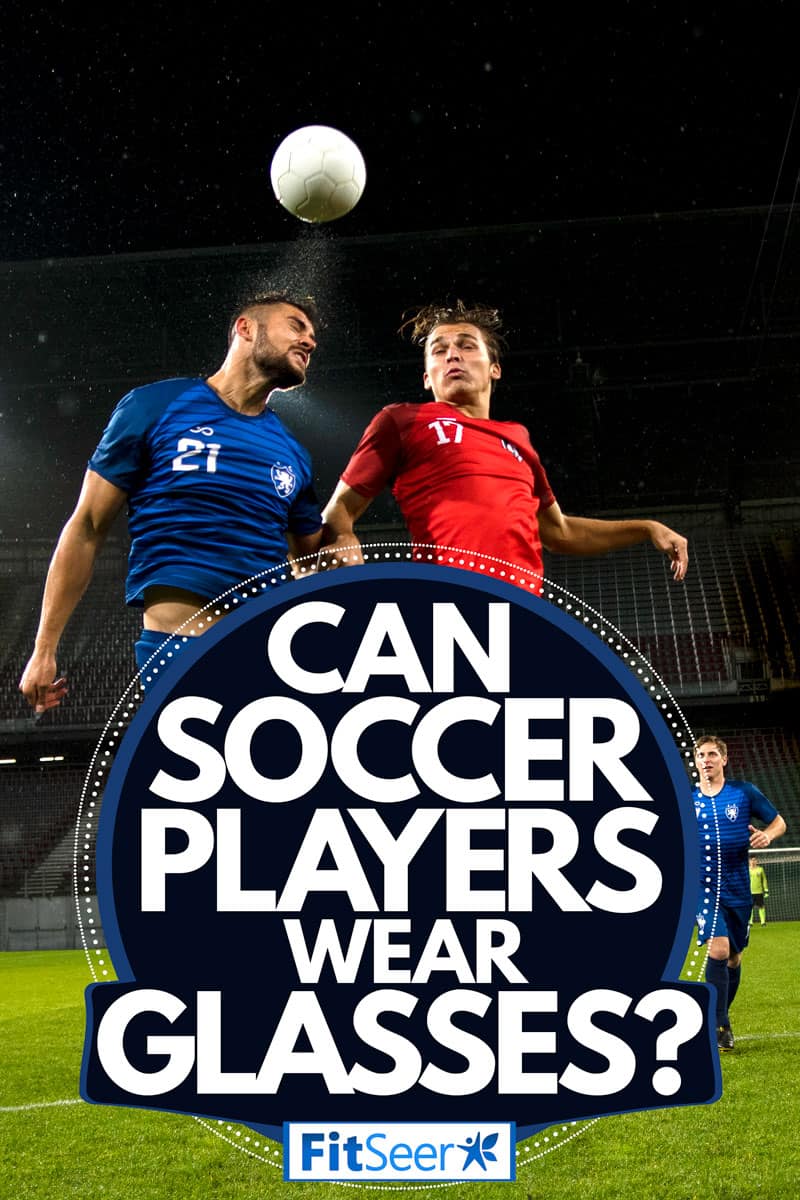 Why shouldn't you wear glasses while playing soccer?

Soccer is a contact sport. This means that there is always the potential that two players will run into each other, increasing the chances that glasses will break.

If your glasses break while still on your face, the broken glass, plastic, or metal pieces that remain are often sharp. These sharp pieces can cut skin. They also could potentially damage the eyeball and eye socket.

Though glasses do not just fall off your face during the course of a normal day, they are much more likely to fall off while playing soccer. Soccer players often sweat, which can make glasses loose and slippery. Glasses that have fallen or gotten knocked off are in danger of getting stepped on by other players. Since glasses often cost $200 or more, it is best to protect them during contact sports.

In fact, some leagues and officials will not let players wear eyeglasses on the pitch at all, forcing them to wear league-approved eyewear.

The good news is that there are other ways to replace the effect of glasses without the danger or potential of damage.

The safest, most reliable way to correct your vision while playing soccer is to wear contact lenses. Contact lenses are small discs made out of silicone hydrogel. They contain magnifying elements that sharpen images. Those who wear contacts put them on top of their eyeballs, where the eye's natural moisture the contacts wet.

Contacts rarely fall out of the wearer's eye. Essentially, they only fall out when a finger or object actually touches the lens, which is rare. They also do not pose any danger to the one wearing them or to anyone else.

The most common hazard to a soccer player wearing contact lenses is for dirt, grass, or other debris to get onto the lens.  Debris is difficult to remove, requiring a saline solution to rinse the lens.

Contact lenses require a prescription after a consultation with an eye doctor. They may not be right for everyone, such as those with exceptionally dry eyes, extremely poor vision, or sensitive eyes.

What are polycarbonate glasses?

Polycarbonate glasses are shatter-proof glasses frames. They do not break except under extreme pressure and are more lightweight than other materials. This makes them perfect for soccer and other contact sports.

Like contact lenses, polycarbonate glasses need a specific prescription provided by your eye doctor. This specific type of frame and lens can be more expensive than other materials, but it might be worth it for those participating in physical activities.

Can you wear sports goggles while playing soccer?

Another practical way to improve your vision while playing soccer and other contact sports is to wear sports goggles. Often referred to as "rec specs," sports goggles do not break. They also attach snugly to your face, which keeps them from falling or getting knocked off.

Some sports goggles fit over the top of your normal glasses, allowing you to wear your prescription lenses. Otherwise, you'll need a prescription to purchase the proper rec specs.

Looking for some types of exercise that you can do while wearing glasses? Check out this article on 16 types of fitness classes that don't involve contact!

Goalkeepers are slightly less likely to get hit in the face than other players, but they still should not wear glasses while playing soccer. A goalkeeper is protected by the rules of soccer, as he or she is not allowed to be touched as roughly as other players on the field. Players who foul the goalkeeper are at risk of being disciplined more heavily than if they fouled a typical field player.

However, goalkeepers often dive and jump to save shots. They also punt or throw the ball vigorously. These actions can jar glasses loose, which could cause them to fall off.

Because of the precise nature of the goalkeeping job, goalkeepers should have great vision. If they cannot see the ball properly, they are more likely to miss a shot and allow goals. So, goalkeepers without perfect vision should use some other sort of vision correction.

Soccer players can wear protective headgear in most leagues. They cannot, however, wear most other types of hats such as baseball or fashion hats.

Protective headgear such as that worn in rugby is permitted in most soccer leagues. FIFA, the world's most famous international soccer organizing body, says that protective headgear must be black (or the same color as the team's jersey), not be attached to the shirt, not have any protruding elements, and not be dangerous to any other player (have a hard outer shell).

Petr Cech, one of the most famous, successful goalkeepers of all time, is well-known to have worn protective headgear during games. He began wearing the soft-shelled helmet after an injury in 2006 where he suffered a life-threatening skull fracture after a collision.

Wearing a baseball cap can be dangerous. The bill is usually made out of hard, yet flexible plastic that could injure another player or the player wearing it.

The one exception to the no baseball cap rule is the goalkeeper. Goalkeepers, as previously mentioned, have less contact with other players. It is also more important for them to keep the sun and rain out of their eyes as they need to see clearly anytime a shot is taken.

Most soccer leagues and rules do not allow players to wear jewelry such as earrings, necklaces, or bracelets. This is for players' safety. During the course of a game, earrings can get ripped out or necklaces and bracelets caught on other players. FIFA does not even allow its players to wear wedding bands.

Since jewelry does not offer any competitive advantage and has the potential for injury, soccer players should take it off before practicing or competing.

Have more questions about the rules of soccer? Read this article for information on how soccer games are timed.

If you are a soccer player, you should not wear eyeglasses while playing because of the chance of injury or breaking the glasses. Since soccer is a contact sport, your glasses could likely get knocked off your face or get broken, causing injury.

Whatever you choose, be safe on the soccer pitch and enjoy the game!

Can You Wear A Life Jacket While Surfing?

Why Does My Bowling Ball Bounce?