Snowboard gear can be expensive. You can easily spend over $1,000 buying gear before ever purchasing a lift ticket. Are there places you can cut corners to save a few bucks? Snowboard boots look a lot like regular boots. Can you snowboard using other types of boots?

Snowboard boots are an integral piece of snowboard gear, and you should not substitute them with other boots. The purpose of these boots is to hold your feet securely in place while working with your bindings to flex in some directions, but not others. Rental snowboard boots are widely available if you do not want to purchase them.

What makes snowboard boots so different from regular boots, though, and what is involved in renting them? Is it best to have stiff snowboard boots? How important is fit, and what can happen when you don't have boots that fit well? Keep reading to find the answers to these questions. 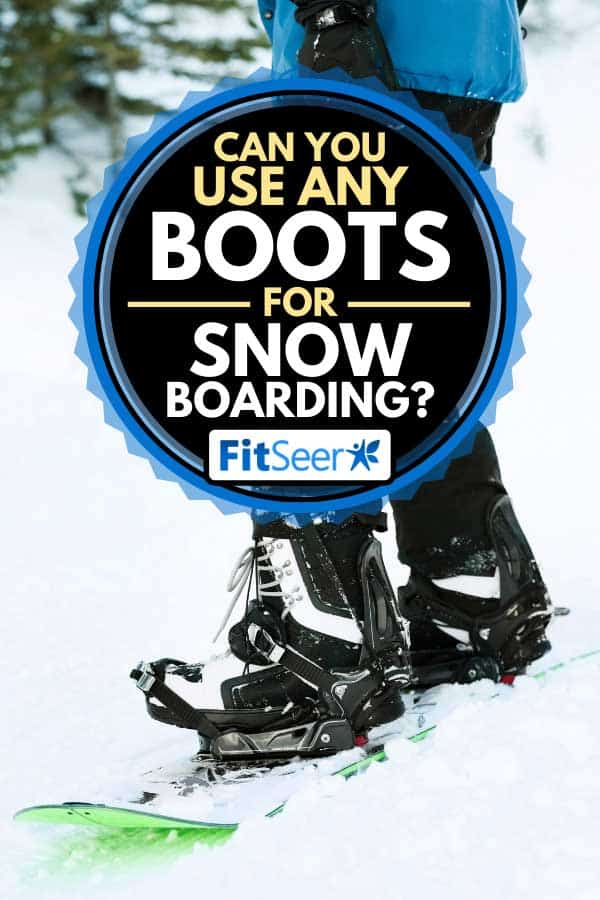 Why You Need To Use Snowboard Boots

Snowboarding boots work together with snowboard bindings to give the rider enough support and leverage to effectively control their snowboard. Without boots specifically designed for this purpose, the rider has to work a lot harder and ultimately has less control of their snowboard.

While it can be broken down a lot further, almost every snowboard boot on the market today has four main pieces:

Let's take a closer look at what each boot component does.

The outer shell is the part of the boot that you see. It's where all the fashion is happening, but it's also very thoughtfully constructed to perform in a specific way.

The boot’s shaft (the part that goes around your calf) is rigid around the boot’s sides and back. This construction makes it difficult to point your toe while in a snowboard boot but allows you to flex forward into the boot’s tongue.

When making heel-side turns, this flex pattern allows the rider to leverage their bindings’ highbacks to pressure the heel-side edge. Conversely, the rider can easily apply pressure to their toe-side edge in toe-side turns.

The lacing system is one of the most critical features of snowboard boots. You typically have three options for laces: traditional, boa, and speed laces. There is also some form of separate lacing on the internal liner of the boot.

Each type of lacing system has its pros and cons, but the one you should choose is a matter of preference. Some prefer traditional laces, just like the laces on any other shoe or boot you own.

These DC boots have traditional laces.

Many snowboarders like the boa lacing system, which tightens and loosens using a dial on the boot’s tongue.

These K2 boots have a boa lacing system.

Others swear by speed laces. Speed lacing systems have an upper and lower zone, each operated by a pull cord. These are popular because you can easily adjust the foot or shaft section’s tightness without affecting the other section.

The laces on a snowboard are positioned on the outer shell to hold your foot into the boot and prevent your heels from lifting while making toe-side turns.

The inner lining of a snowboard boot works to keep your feet comfortable and warm. These linings are often heat-moldable to achieve a perfect fit for the owner of the boots.

In addition to keeping you warm, the linings serve to cushion your feet and lower legs from the forces that your body experiences while snowboarding. When you're new to snowboarding, these forces are minimal. However, more advanced riders can experience some pretty extreme forces while riding.

The lacing system of the inner lining performs a similar function to that of the outer shell. These laces work to keep your feet secure in the liner to prevent chafing and blisters and to keep your heels from lifting as you ride.

Snowboard boot insoles are often removable and are usually also heat-moldable. Just like in your regular shoes, the insoles’ job is to provide support to your feet. If your snowboard boot insoles don't provide enough arch support, or perhaps too much, you can usually swap them out for a different pair that works better for you.

What You Should Know About Renting Snowboard Boots

Renting snowboard boots is an excellent option if you're just learning to snowboard. These boots usually won't be topnotch in quality, and they may be pretty broken in. Despite this, they give you the chance to make sure snowboarding is something you want to do more than once before making a significant investment.

Rentals are available at most ski areas and don't typically require advanced reservations. However, you should keep in mind that there is a tipping point here. It could end up being more cost-effective to buy boots than rent them depending upon how much the rentals cost and how many days you plan to snowboard.

Snowboards, boots, and bindings all come in various stiffnesses because certain types of riding benefit from having a stiffer board while other conditions favor softer equipment. Typically, riders prefer a consistent flex profile for their board, bindings, and boots. In other words, if you ride stiff boots, you also ride a rigid board and stiff bindings.

Typically, snowboarders who race, do big mountain riding, or spend time catching huge air on transitional features like jumps and halfpipes prefer a stiff riding setup. Stiffer boots offer better control and support while standing up to the more extreme forces and conditions of those types of riding.

Beginner riders should avoid using stiff gear because it will be too aggressive for less experienced riders.

Snowboarders who spend most of their time riding in terrain parks with rails and jib features prefer softer riding setups—this style of riding benefits from having gear that allows for a lot more flex and close-quarters maneuverability.

While softer boots are better for beginner riders than really stiff boots, some riders will find that these boots aren't responsive enough while trying to develop muscle memory.

Medium-flex boots are ideal for beginners and all-mountain riders who do a little bit of everything. These boots are supportive and responsive while not being too aggressive or muted.

Why Do My Feet Go Numb In Snowboard Boots?

Numbness results from restricted blood flow, and there can be several causes of this where snowboard boots are concerned.

Too Much Stuff Crammed Into Your Boot

Do not tuck any part of your pants into your snowboard boots. Snowboard boots should only have your foot and your sock inside of them. Stuffing anything else into your boot can create pressure points that reduce blood flow to your foot.

Boots Are Too Tight

Boots that are too tight could also be a cause of numb feet. Try loosening up your laces, or finding a boot that fits differently.

Extended exposure to extreme cold can result in frostbite. Frostbite can cause permanent damage. Know the signs of frostbite and how to treat it before you go out for a long day on the slopes.

Should My Toes Touch The End Of My Snowboard Boots?

While standing up straight, your toes should be touching the ends of your boots. When fitting snowboard boots, gauge correct sizing on how they feel while standing in a slightly crouched position. This position will simulate how they will fit while you are riding. If you can feel your feet pull back as you crouch, then your boots are too big.

Most riders find that Burton boots are on the narrower or smaller side. According to Burton's website, most of their customers purchase boots at least one size up from their regular shoes.

Snowboard boots are highly technical snowboarding gear. You cannot replace them with regular shoes or boots. When selecting a pair of snowboard boots, think about the type of riding you plan to do. Newer riders should look for a medium-flex boot. Renting is a great option for those who are not ready to commit to a purchase, and no matter what type of boots you end up with, make sure they fit correctly!

Which Swimming Stroke Is Easiest?

How Long Does It Take To Learn Swimming?

How Fast Can A Football Player Run?