Basketball is a game of skill and teamwork. With that, the court size happens to vary depending on the level of play. So let's take a look at the size of a basketball court at each level.

At the National Basketball Association and College level, the court's dimensions are 94 feet by 50 feet. In contrast, high school and junior levels play on 84 feet by 50 feet court. Lastly, international play is 92 feet by 49 feet.

As you can see, the higher the level of play, the bigger the court. In this article, we will look at the different sizes of basketball courts. In addition, we will answer other frequently asked questions about the basketball game, so read on! 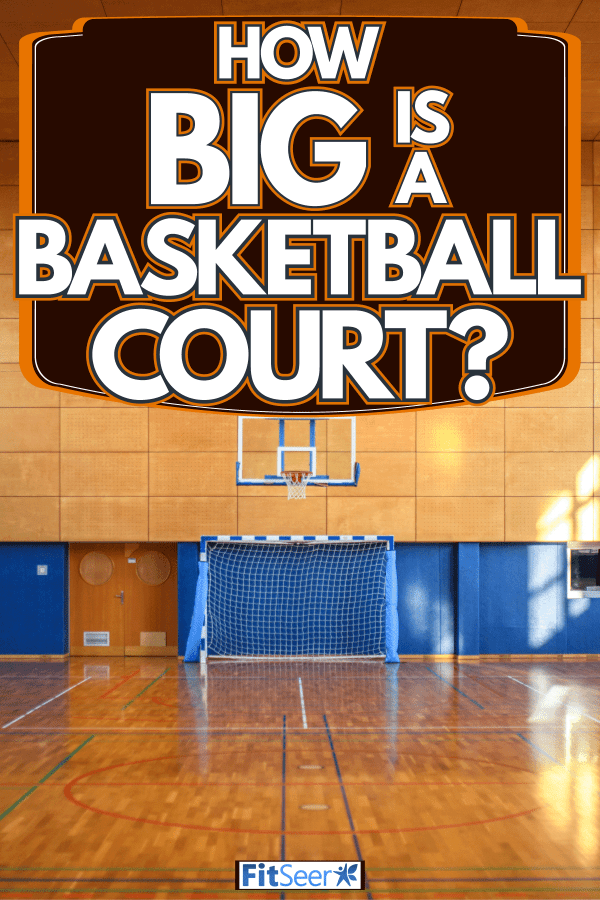 How Big Is A Basketball Court?

Basketball is a sport that is played by two teams of five players. The game's objective is to shoot a ball through a hoop mounted at the top of a frame or pole, scoring points.

It is all very simple, but basketball is a very competitive and skilled sport.

The size of a basketball court varies depending on the level of play. At the National Basketball Association [NBA] and college level, it's 94 feet by 50 feet. While at high school and junior levels, it's 84 feet by 50 feet. Lastly, international play is 92 feet by 49 feet.

As you can see, the court gets bigger as the level of play increases. So now that we've taken a look at the different sizes of basketball courts and answered other frequently asked questions about the game of basketball why not stay for a while and read more about basketball?

How many square feet is a high school basketball court?

There are 84 by 50 feet in a high school basketball court with 4,200 square feet. The game rules remain the same except for the number of fouls permitted to each player. Each play has five fouls in high school before being considered "fouled out" of the game.

In the professional leagues, players receive six fouls per player before being fouled out of the game.

How long is an NBA basketball court?

The National Basketball Association [NBA] and the college level's court size is 94 by 50 feet, equaling 4,700 square feet. As you can see, there is a significant difference between the high school and junior leagues.

Is the NBA court bigger than a college court?

No, a college basketball court is the same size as an NBA one. The only difference is the distance from the 3-point line to the hoop.

How many square feet is an international basketball court?

An international basketball court is 92 by 49 feet, with 4,508 square feet. It is unsure why there is a difference between the court sizes between NBA and international professional play.

How much room do you need for an outdoor basketball court?

Ideally, you will want 30 feet by 50 feet to have a full basketball court. However, you can build an outdoor basketball court however you would like. For example, some homeowners choose to do only a half-court which is enough for the game.

Building a half-court will save you money and still allow you to practice your game. However, if you want a full-court for playing competitively and recreationally with friends or other players, we suggest that you build 30 feet by 50 feet. 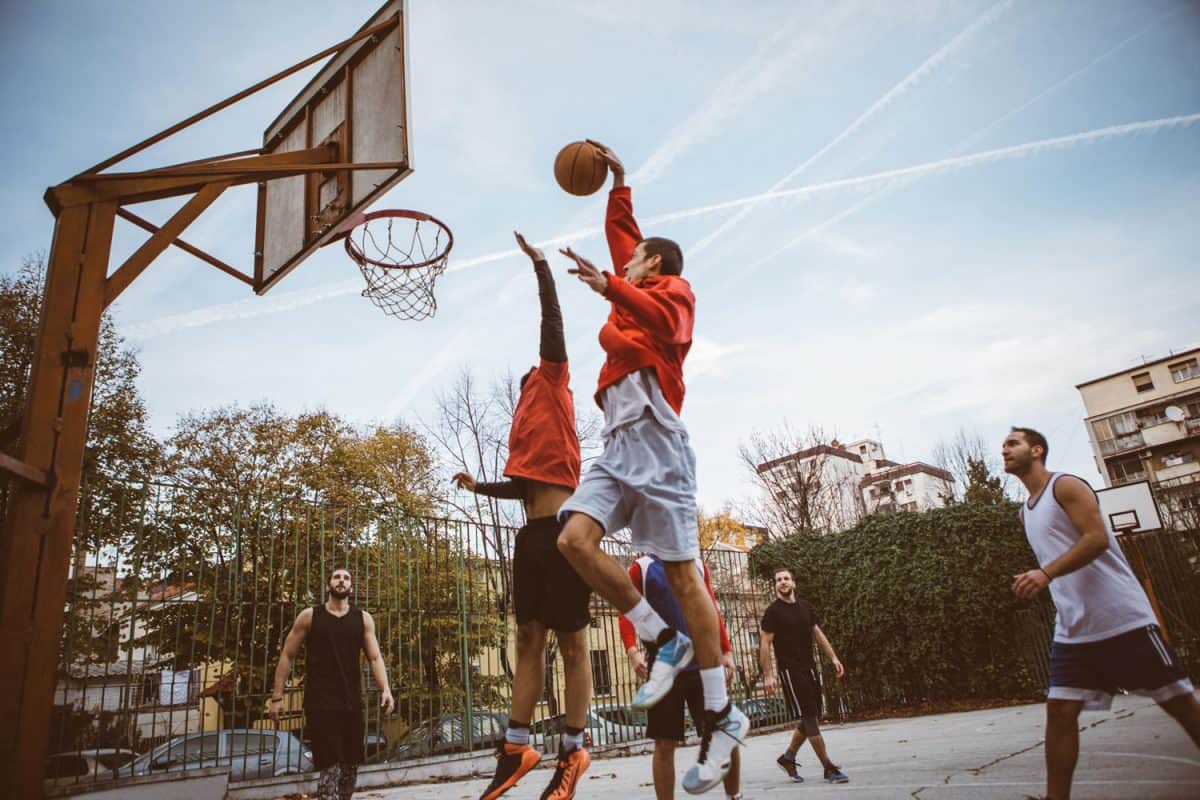 How far is the 3-point line?

Do you have to play with five players in a game of basketball?

Yes, basketball is played in teams of five. The bench players in the court can be designated as a substitute who can enter and leave during timeouts. However, only five players are allowed on the court for each team at one time.

However, for backyard play, teams can choose to play four against four, three against three, two against two, or one on one. The basketball game is at your discretion when playing in a park or at a public gym.

Can you play basketball in sandals?

No, sandals are not recommended for playing basketball. You can, but it will decrease your ability to complete a layup or well-made pass to another player.

It is best that you wear close-toed shoes when playing the game or practicing at home, so you don't lose traction when running up and down the court.

In addition, it is a good idea to wear sports shorts when playing. Wearing pants will make it tougher to maneuver during the game. 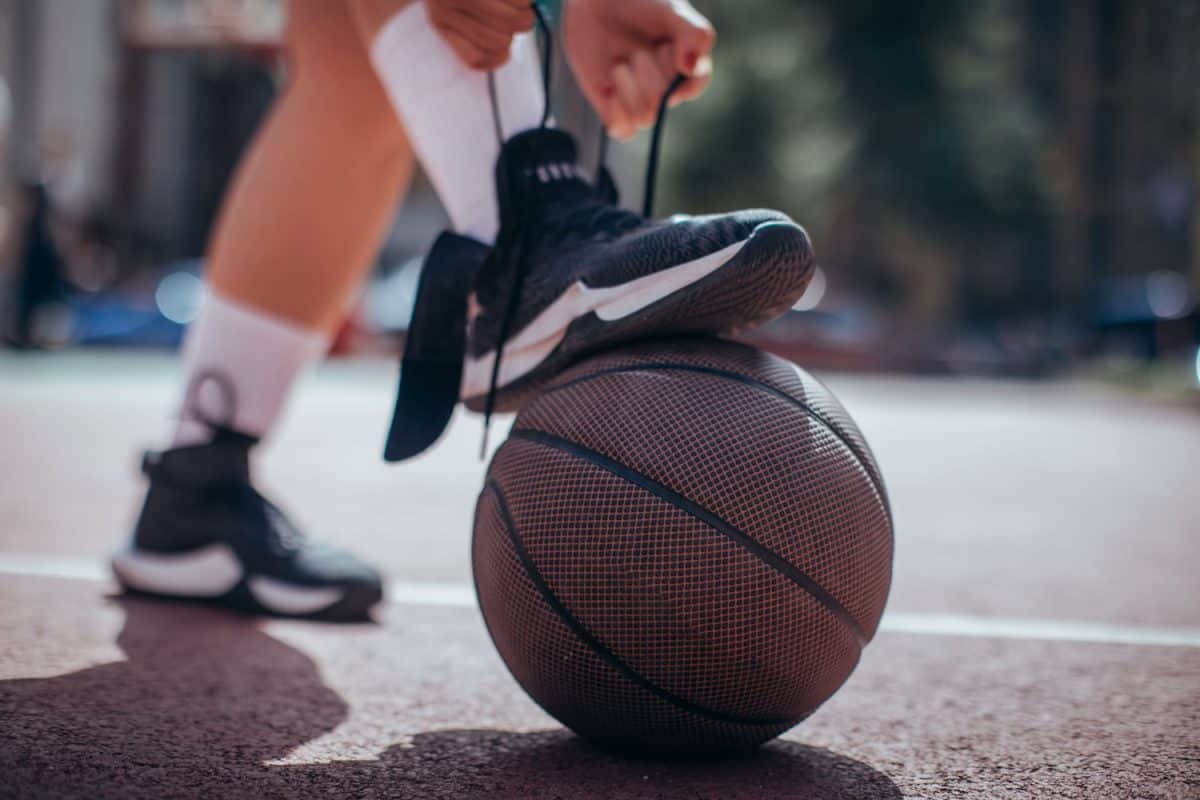 Is it better to play basketball indoors or outdoors?

It is better to play on an indoor court for the most part. However, if you are playing for recreational purposes, then either work.

If you are outside, there can be unpredictable weather conditions that may interfere with your game. For example, strong winds and heavy rains could hamper your ability to play.

Furthermore, it will be harder to shoot the ball into the hoop if trees or large plants obstruct your line of sight.

Indoors, no weather conditions can stop you from playing basketball. However, most indoor courts are found in either high school gymnasiums or YMCA facilities.

If you want to play basketball for recreation, we suggest that you look up YMCA locations near your area and see which one is the closest. This way, there will be no interruptions in your game!

What is the rule for traveling in basketball?

Basketball has rules that are important to remember. One of these rules is traveling, also known as carrying the ball. This means that you can't pick up the ball and take two steps without dribbling.

Traveling is not allowed in any of the levels of play. If you do so, the ball is given to the other team.

If playing competitively, it would be best if you knew all of the rules before you step foot on an authentic basketball court. Many resources online can help answer any questions you may have, such as the NBA rulebook.

Can anyone play basketball?

Yes! Basketball is a game that anyone can play and enjoy. It does not matter if you are tall or short, an adult or child; the basketball rules do not discriminate against any person based on their age, height, weight, gender, sexual orientation, etc. So, if you'd like to play, go out, purchase a ball, and find a court near you!

The game of basketball can also be played at home if you don't mind sharing the space with your siblings. It's great to teach younger children how to play, and it is also a fun family activity that everyone can enjoy.

If you are interested in playing the game but do not know where to start, then look up your local leagues to find basketball leagues around you.

What is the difference between NBA and NCAA basketball?

There are two different types of basketball played in an organized way: college basketball and professional basketball.

The most well-known professional league is the National Basketball Association [NBA]. This league is composed of 30 teams, such as the San Antonio Spurs and Golden State Warriors.

The NCAA or National College Athletic Association consists of men and women teams at the college level. Almost every college school in the country has a team and they are divided into different tiers of leagues depending on the location and size of the school.

For the most part, the main difference between college and professional basketball is that men play in the NBA, whereas women play in the Women's National Basketball Association [WNBA]. The teams in the NBA and WNBA all have different names associated with the city they are owned in. However, the WNBA differs from the NBA, in the sense that it only has 12 teams in the entire league.

Basketball is a great sport because of the many benefits of exercise and recreation. So if you are ever on the fence about wanting to learn how to play, then go out and try it!

You might find that you love playing basketball with your friends after school or on weekends.

In addition, there are many basketball leagues that you can join, depending on your age, gender, and skill set.

Lastly, we hope this article helped answer all of the people's most popular questions about playing basketball. If you still want more information about the game, then check out some of our other blog posts (see below) to learn helpful information and tips to play the best as possible.

How High Should The Ceiling Be For An Indoor Basketball Court?

Does Tennis Count As Cardio?

Does Baseball Play in the Rain?